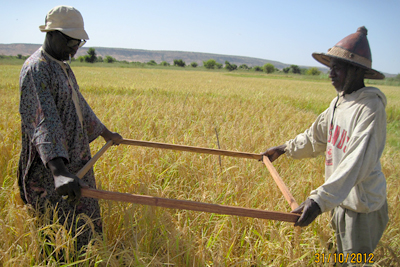 Hamidou Guindo
Farmers trained in Cornell's SRI-Rice harvesting methods, measure yields of 700 squares scientifically, 10 squares for each of the 70 farmers participating in this evaluation, in times of jihadists' occupation of the area.

Seventy rice farmers in seven villages around Douentza, Mali, on the front lines between the jihadist-controlled north and government-controlled south of the embattled West African nation, increased their yields by an average of 86 percent this past season.

Supported by a small grant from the nonprofit SRI Global in partnership with SRI-Rice at Cornell, a self-help association called 3A-Sahel worked with local farmers to use the System of Rice Intensification (SRI) methodology to increase yields from 4.3 to 8 tons per hectare. This project may have been the only one to continue operating in northern Mali after the jihadists took over that region in September 2012.

Project leader Hamidou Guindo, an agronomist and refugee from the occupation, had been in charge of the Mali Ministry of Agriculture’s SRI program in the eastern region of Gao for three years, but fled after the jihadists took over in March 2012. He returned to his hometown of Douentza, then still under government control, where Guindo and others set up 3A-Sahel to improve agriculture around Douentza.

Trained by Cornell SRI-Rice program director Erika Styger in 2008, Guindo had been helping farmers in Mali adopt SRI, an agro-ecological methodology to increase productivity of rice and other crops by 20-100 percent while reducing the amount of seed, water and chemical fertilizer needed, simply by changing how the plants, soil, water and nutrients are managed.

The May 2012 grant enabled 3-A Sahel to introduce SRI to 10 farmers in each of seven villages, using comparison trials and collecting biophysical and socioeconomic data. Farmers there have little or no access to store-bought seed or fertilizer. Farmers can use SRI methodology on their own, without outside inputs, and SRI has worked well in the neighboring Timbuktu region and other parts of Mali. For SRI-Rice at Cornell, this was an opportunity to collect a fifth consecutive year of data from Mali and to examine how farmers at a new site adapt the methodology to their conditions.

“Even at the best of times, it’s not easy to work with farmers in this part of Mali, on the southern edge of the Sahara Desert,” Styger said. “Distances between villages are long, and the roads often impassable, especially in the rainy season.”

The project provided Guindo and his team the means to travel between villages and to buy the basic tools and simple, locally made mechanical weeders needed for SRI. They worked closely with farmers and village authorities, and the project was going well, dealing only with unpredictable rains and flooding that make every growing season uncertain.

It all became more complicated in early September, when well-armed jihadists occupied the town of Douentza. Suddenly there were roadblocks everywhere; the school shut down; men were forbidden to shave. Anyone found with a laptop or camera came under suspicion.

To get around without arousing suspicion, Guindo and his team let their beards grow and dressed in the simple, worn clothing of a village farmer. They quickly learned how to speak and act so as not to antagonize the occupiers, and were able to finish their work unharmed. And the results were worth it.

Today, locals report that the jihadist occupiers have fled Douentza following the French intervention. Guindo and his team hope that by the beginning of the next growing season they will be able to take SRI to more farmers.