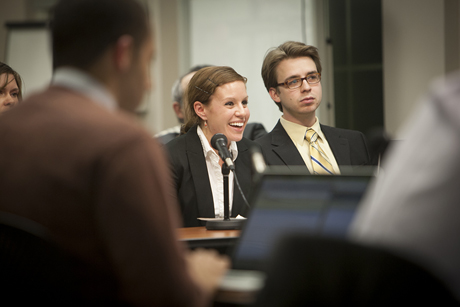 Parking in Collegetown may get a little easier, thanks to 22 Cornell Institute for Public Affairs (CIPA) graduate students who have recommended ways to improve parking management, enforcement and development in Collegetown.

She agreed, and challenged the CIPA students to recreate the study, which professionals had conducted in nine months. The catch? The students had only three months to do it.

They divided into four groups, separately tackling parking inventory and use, residential surveys, business surveys and stakeholder interviews. They quickly had to learn how to conduct the surveys and interviews, assess parking inventory, and identify stakeholders and the potential effects new parking policies would have on them. "The people who had to go out and count cars had it toughest," said Samantha Pawlak, M.P.A. '13, who interviewed stakeholders.

One of the biggest challenges for the students was figuring out how to communicate effectively and efficiently, so that they could analyze the data they had gathered and develop findings with input from all four teams, Miller said. "A lot of people could reach the middle of their careers and never have to manage a team of 22 people in a professional setting," she pointed out. The students worked in an organizational structure that promoted collaboration and communication and involved email, a class website and technologies such as Dropbox and Blackboard. They also used low-tech techniques: lots of class time to meet and discuss, and simple forms to provide each other with feedback on reports and presentations.

And they had to make sense of conflicting data, said Henry McCaslin, M.P.A. '13. "Multimodal transportation problems are very complex, and this leads to a lot of disagreement on the real nature of the problem among residents, business owners, Cornell and the city, which can lead to finger pointing," he said.

The students found a general perception that parking in Collegetown is so difficult that it is detrimental to businesses, residents and Ithaca as a whole. But they also found that there may be enough parking. The occupancy rate for street parking was often well below 85 percent, a number widely considered a healthy rate. The data suggest that the real problem isn't the number of spaces, but their location and price. "The hills and cold weather in Ithaca deter people from wanting to park just a little bit farther from their destination," Pawlak said.

The students recommended the city lower the price in the Dryden Road parking garage, which was at most only half full during the study period. The city should set peak and off-peak rates at street meters, allow meters to accept credit cards and offer 30-minute parking outside businesses. And late-night bus service should be more frequent and include more routes in and outside Ithaca.

The students also recommended bus service to major cities, to reduce the number of parking spots students use as long-term car storage. And the city should collaborate with Cornell to make better use of its often-vacant lot at Williams Street and Stewart Avenue.

The students presented their recommendations Dec. 18 to the city of Ithaca's Planning and Economic Development Committee, which will use the data to revamp Collegetown parking within the year, said city planner Megan Wilson. "To have that data available comes at a perfect time. I was impressed with the quality of the data, in particular the extensive field surveys. I thought they did a good job," Wilson said.

No matter how the city decides to proceed, McCaslin is sure of one thing: "Ithaca's transportation problems would be a great deal simpler if we didn't have all these darn hills."