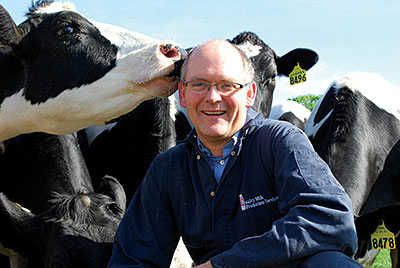 Provided
Ynte Schukken, professor of epidemiology and herd health at Cornell's College of Veterinary Medicine, is heading a study with the aim of reducing the incidence of Johne's disease in dairy cows.

Every day, more than 16 million gallons of milk are consumed in the United States. However, despite the technology and safety standards in place, some of that milk contains a nasty bacterium that is linked to Johne's disease in cattle and possibly Crohn's disease in people.

A new $500,000 grant over five years from the U.S. Department of Agriculture's National Institute of Food and Agriculture will allow Cornell researchers to continue their research to identify the bacterium in milk, determine risk factors for milk contamination and document recommended intervention strategies to make milk safer.

The bacterium, known as Mycobacterium avium subspecies paratuberculosis or MAP, incites an infection in ruminant animals that takes about four years to show clinical signs. In the meantime, dairy cows typically have had two calves during that period that may have contracted the infection from their mothers and have produced thousands of gallons of milk headed for store shelves. Recent studies have shown that MAP in milk can survive pasteurization, which has raised human health concerns due to the widespread nature of MAP in modern dairy herds.

Once MAP has infiltrated a herd, the cows are widely susceptible to Johne's disease, which is contagious, chronic and often fatal in cases of clinical disease. The disease is blamed for up to $250 million in annual losses to the U.S. dairy industry.

The new grant will build on the results of the current $2.5 million project, which has been under way since 2009.

The researchers are in the midst of a nine-year longitudinal study to gather DNA from four generations of cows and bacteria, said Ynte Schukken, principal investigator and professor of epidemiology and herd health at Cornell's College of Veterinary Medicine.

"Our study covers the entire spectrum, with data and samples collected from the field cultured in the lab, and bacteria and host DNA sequenced using the most modern genomic methods," Schukken said. "Because of this unparalleled nine-year data set, we have the potential to unravel the mysteries of Johne's disease, a very slow-going and devastating infection on dairy farms."

Schukken's investigation will extend prior results that have already explained transmission patterns of MAP at the molecular level, developed mathematical models for predicting transmission, devised control programs and monitored those programs' success rates.

"Our immediate goal is to provide dairy farmers with the tools they need to produce milk that is free of MAP bacteria," said Schukken. "Evidence from previous work we've done proves that a high percentage of dairy farms in the U.S. have MAP-infected cattle, so reducing viable MAP in raw and pasteurized milk is of importance. First for the health and well-being of the cows, but also, because of the possible connections to Crohn's disease, for the health and well-being of people."

Stephanie Specchio is director of communications at the Vet College.