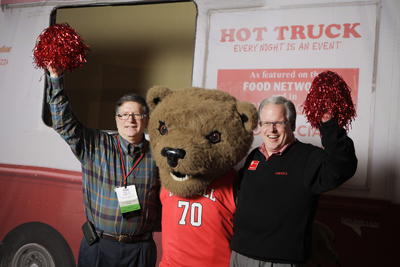 Jim Mazza '88, associate vice president for alumni affairs, right, poses with Stan Fish '72, DVM '75, and the Big Red Bear in front of a mockup of the Hot Truck at the CALC tailgate party Jan. 19. More than 100 alumni organizations, and Cornellians from the classes of 1943-2016, attended CALC. 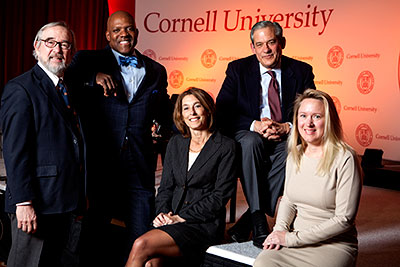 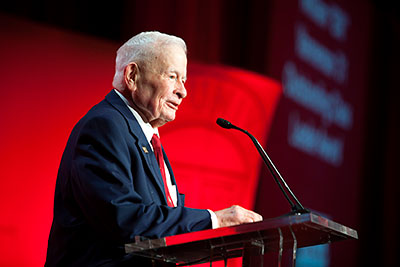 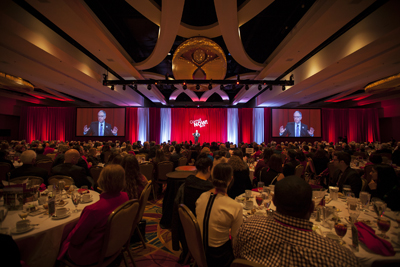 At the CALC Saturday lunch, President David Skorton saluted two dozen recipients of the Frank H.T. Rhodes Exemplary Alumni Service Award, who were in attendance to share their Cornell leadership wisdom with other volunteers. Outside the annual awards dinner each fall, it was the first time a large group of Rhodes Award winners had been assembled. Cornell Now campaign co-chairs Andrew Tisch '71 and Steve Ashley '62 also said the campaign has raised more than $3.9 billion toward its $4.75 billion goal. 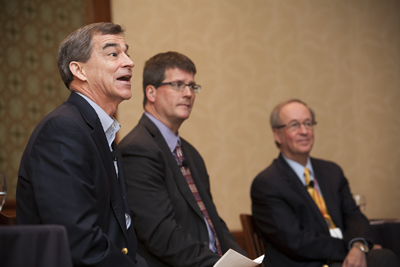 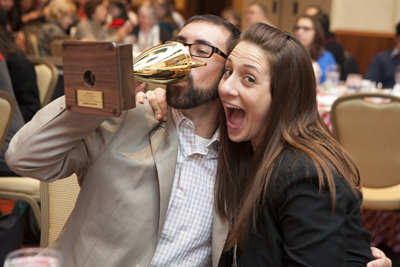 Doug Mitarotonda and Julie Vultaggio, co-presidents of the Class of 2002, pose with the first Cornell Alumni Association Cup at CALC. Their class received the new award, created to recognize alumni group activities or events in the past year, for creating Non-Reunion Reunion - a way to keep classmates engaged with Cornell every year by hosting alumni events in different cities for classes not having an official Reunion that year.

Nearly 800 Cornellians attended the Cornell Alumni Leadership Conference (CALC) in Boston Jan. 18-20. The annual event, hosted by the Office of Alumni Affairs, brings together alumni volunteers from classes, affinity and diversity groups, regional and international clubs, and other organizations to participate in training, share best practices, develop strategic programming and network. This was the fourth annual CALC and the first in Boston, an area home to more than 11,000 Cornell alumni.

Along with more than three dozen sessions devoted to topics such as diversity networking and engagement, online community building, leadership skills, succession planning and philanthropy in higher education, the conference's headline event was a Jan. 18 panel discussion, "Health Care Today, Implications for Tomorrow," moderated by Dr. Philip R. Reilly '69, a partner at Third Rock Ventures and a Cornell trustee with a long-standing interest in genetic testing and developing new therapies for genetic diseases.

Glimcher said fiscal constraints are among the biggest challenges to the research community's work to improve health care. She noted that funding from the biggest supporter of medical research, the U.S. National Institutes of Health, has fallen by about 20 percent over the last decade. "That means that we're not funding our best and brightest scientists," she said -- just as new technologies and "precision medicine" have brought researchers to the edge of a new era where discoveries made in the lab will be translated quickly into therapeutic approaches.

Asked about how to streamline regulatory procedures, Resnick said the prospects for new drugs and devices in the U.S. and worldwide are bright, explaining that a new focus on outcomes derived from evidence-based research will lead to less waste and less money spent on treatments with few proven advantages.

Firlik's company focuses on patient behavior and on integrating patients into the health care system. "It's not enough to have an effective drug -- you have to have effective patients," she said. Clinical trials usually have 100 percent compliance, she said, and compliance rates for prescribed medications are only 50-70 percent.

Asked where investment dollars in health care should be directed, King-Shaw argued that because Obamacare will pay hospitals and other providers based on outcomes, investment should be made in strategies to collect, aggregate and disseminate data.

Panelists discussed the need for more and better data (electronic recordkeeping would reduce the $17 billion cost of medical errors each year, Glimcher said), and the need to focus on preventive medicine.

The majority of Americans live in areas underserved by primary care physicians, Resnick said. "We are facing a shortage not just of research scientists, but also of family practitioners." Panelists noted that another significant challenge is the debt that medical students face upon graduation -- often driving those who might otherwise want to focus on primary or family care into higher-paying specialties.

King-Shaw said he is working on a project that would establish urban grocery stores and add health coaches, educators, physicians and on-site clinics, creating an intersection of diet, medicine and health education.

They also agreed that the high cost of malpractice insurance and litigation posed another obstacle. "We're challenged by society to choose between bad outcomes and bad practices," Resnick said. "The very best practitioners in the very best institution can do their very best and still have a bad outcome ... and those bad outcomes end up in our legal system."

Answering a question on the one thing she would do to improve health care in the United States, Firlik said she would want to "make sure that the best and brightest of our students go into science and medicine. We're in a society where the Academy Awards trump Nobel prizes in terms of people's interest," she said.

Glimcher said she "would break down the silos between our scientists and our clinicians, because we need to go not only bench to bedside, but bedside back to bench."

About 470 CALC participants and other Cornellians in the Boston area attended the discussion.