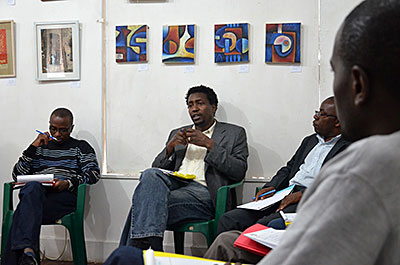 Courtesy of Patrick Mureithi
Mukoma Wa Ngugi leads his workshop on cultural criticism and theory for Kenyan journalists at an arts center in Nairobi in early December.

Assistant professor of English Mukoma Wa Ngugi provided Kenyan journalists with useful theoretical tools and paths to critical thinking at a two-day workshop he led in Nairobi in December.

Mukoma's goal for the "Cultural and Literary Criticism for Journalism" workshop was "to create a place where journalists, writers and artists could be in conversation" and show arts and cultural journalists how literary and cultural theory can be applied to their writing and their knowledge of arts and culture.

"I tend to be in both worlds," Mukoma said. "I write fiction and write for newspapers, and I'm also a scholar. One of the things I find is there is not much dialogue between scholars, writers, and arts and cultural journalists. You'd think people would sit down and have conversations about culture. For example, what should be the language of African literature -- African languages or European languages? [We wanted] not necessarily to find an answer, but to have these questions open up a debate. Writers tend to come in with answers."

Mukoma said the workshop was attended by 15 professionals, among them cultural and arts journalists from major Kenyan news organizations, features writers, cartoonists, a filmmaker, bloggers and youth magazine editors.

The short story "You in America" by Chimamanda Adichie was used to apply various cultural and literary theories. The literary example "was very useful, dealing with a young woman from Nigeria in the U.S., talking about her experiences with sexism, racism, and her people back in Nigeria," Mukoma said.

The workshop covered theories the first day, and then how they could be applied. The topics included contradiction, psychoanalytic concepts and applying African feminist theories in a book about foreign relations.

"In giving them theoretical tools, my idea was to take these theories and apply them and get them out there, have them practiced -- with the idea of the writers and critics as equal partners in the production of aesthetics," he said.

He also emphasized "thinking about globalization, filtered through questions of the Kenyan diaspora in the literature we are producing," he said.

They also viewed and discussed a documentary film in progress by Patrick Mureithi, "about healing after post-electoral violence in Kenya in 2007. We were able to talk about that in critical ways," Mukoma said.

The workshop, hosted by the African Arts Journalist Network at Kuona Trust Art Centre in Nairobi, Kenya, was organized by Mukoma with Mwenda Micheni and Joseph Ngunjiri, both journalists with the Nation Media Group.

"My hope is to be able to bring the workshop to Cornell and open it up, have more people in literary and cultural criticism work with journalists," Mukoma said. "We would have to bring African journalists here; they're the ones who really need these sort of resources."

Journalists, in turn, could share skills with academics -- "how to write an op-ed, for example," he said. "It is a two-way street. Many scholars cannot write outside of their scholarly work. It would not be just us teaching, we would also be getting something in return."