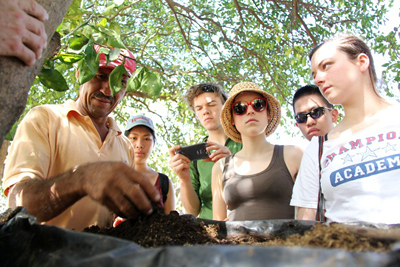 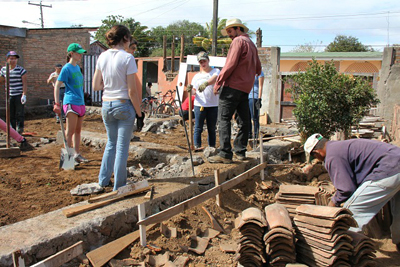 At the construction site, Cornell students build the foundation of an affordable sustainable model home for low-income Nicaraguans. 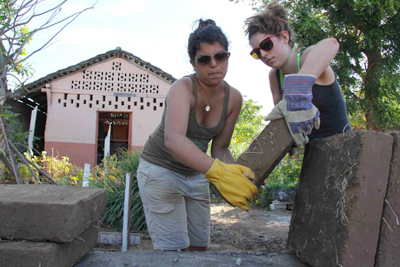 Camelia Hssaine '14, left, and Celine Jennison '14 spend part of winter break building the house, due to be completed by mid-February.

An affordable and sustainable model house – complete with some of the latest eco-technologies – is going up in Nagarote, Nicaragua, thanks to more than 50 Cornell students involved in the Sustainable Neighborhoods Nicaragua (SNN) project.

During winter break, 25 Cornell University Sustainable Design (CUSD) students worked in Nagarote to build the house, which may be completed by mid-February 2013.

After conducting research during the past two semesters, students involved in the SNN project have designed the home and its edible landscape for low-income Nicaraguan families. The house is intended “to serve as a platform to showcase sustainable housing initiatives,” says project leader Kai Keane ’14.

Nagarote was chosen because of its proximity (40 miles) to the country’s capital and its commitment to sustainability, he said; the city has won an award several times for being the nation’s cleanest city.

Two out of every three Nicaraguans experience difficulties related to housing, Keane said. Standard relief homes usually use such conventional materials as metal roofing and concrete blocks, making the houses uncomfortable, unattractive, unaffordable and culturally disconnected from Nicaragua’s past. The model home, however, uses clay tiles for roofing and adobe blacks for the wall structure.

“The students’ design has the potential to be a nationally implemented model,” says Alan Wright, executive director of SosteNica, one of SNN’s nonprofit project partners.

To research, design and build the house, CUSD divided its efforts into six major design components: the house itself, energy-efficient stoves, composting toilets, landscaping, neighborhood planning, and rain capture and grey water treatment, as well as business and communications.

To fund the project, SNN students raised more than $25,000, to pay for tools, labor, overhead costs, and legal and administrative fees for the prototype housing model.

The project, says Marvin Pritts, chair of Cornell’s Department of Horticulture and an adviser for SNN, not only exemplifies President David Skorton’s call for engagement, but also goes above and beyond typical coursework.

“There’s something about getting people out of their comfort zone, projects like these foster personal growth experiences for participants … facilitating meaningful exchanges that allow individuals from around the world to get to know and learn from each other,” Pritts says.

“It often feels that student engagement can be undervalued at Cornell, so from the beginning we wanted to ensure that we had full support from the Cornell community,” explains Keane. “With generous help and crucial support from Richard Kiely, director of the Center for Engaged Learning and Research, we were able to make this project a reality. The center really helped bring together like-minded people for a truly successful project.”

To ensure that the students sustainable design is consistent with the local culture, students on a site-analysis trip to Nicaragua last May used participatory action research methods to take cultural aspects into consideration for the design, Keane says.

Ceprodel, a micro-finance organization in Nicaragua, has been collaborating with Cornell students by providing local input and on-site implementation.

This project is a collaborative effort of CUSD; Cornell’s Center for Engaged Learning and Research; the Department of Horticulture; SosteNica, based in Philadelphia; and Ceprodel, SosteNica’s Nicaragua-based partner.