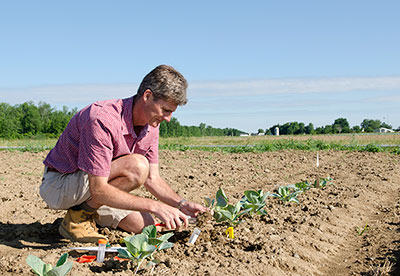 Chefs and home cooks in the eastern U.S. could soon have easier access to a local "super food," thanks to a Cornell-led team of researchers working to expand broccoli's availability at farms, farmer's markets and grocery stores from Maine to Florida.

Broccoli is at the center of a nearly $1 billion a year U.S. industry, due in part to growing awareness of its health benefits. Broccoli has anti-inflammatory properties, is high in fiber and has been linked with improving vitamin D deficiency and helping prevent certain cancers. Broccoli also contains phytonutrients that aid in detoxification, making it a fitting food for the New Year.

But despite increasing consumption, 90 percent of broccoli sold in the East is produced in California and Mexico, resulting in more food miles, greater greenhouse gas emissions and profits that leave the region, according to Thomas Björkman, associate professor of horticulture in the College of Agriculture and Life Sciences who is based at the New York State Agricultural Experiment Station in Geneva, N.Y.

Björkman is leading a team that includes researchers from public broccoli-breeding programs and private seed companies, production specialists and economists in building a regional food network for the vegetable. Their goal is to move production from isolated pockets to a year-round market worth $100 million a year.

Two years into the project, which is funded by a $3.2 million U.S. Department of Agriculture grant and supplemented by $1.7 million in matching funds from participating companies, the goal looks to be within reach.

"Most standard varieties developed for western climates have trouble lasting through hot and humid eastern summers," Björkman says. "But new genetics have allowed us to develop varieties that don't make misshapen heads when the weather turns consistently warm."

Summer-tolerant varieties could expand a growing season currently restricted to spring and fall, but to make the industry profitable, the team must also figure out distribution, says Miguel Gomez, assistant professor at Cornell's Charles H. Dyson School of Applied Economics and Management. Gomez has developed an economic model to identify cost-effective pathways for getting broccoli from the farm gate to the grocery store.

His model compares data from emerging eastern broccoli-producing regions with mainstream producing regions in California, Arizona and Mexico to determine the most cost-effective volumes and seasonal routes given production zones, consumption centers and production costs.

Results show the additional expense involved in producing broccoli in the eastern U.S. can be offset by savings in transportation costs. According to Gomez's model, a 30 percent increase in eastern acreage has the potential to reduce costs by $5 million a year under current diesel fuel prices.

Gomez also found that a year-round eastern broccoli industry would reduce the broccoli growing and transportation system's carbon footprint -- translating into a reduction in carbon dioxide emissions of 1.4 million pounds per year, an amount roughly equivalent to taking 125 cars off the road.

"More problem solving is needed to identify optimal locations for growing and postharvest facilities and ways of keeping large amounts of broccoli cold," says Gomez. "But initial findings show that if we can answer those questions, we can have a strong industry here. It's broccoli today, but we hope the project can be a model for other crops."