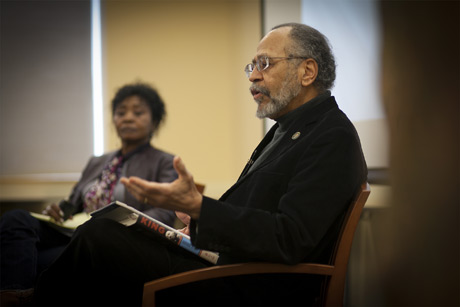 Black History Month is an annual reminder to focus on the role of black people in the development of world civilizations and to memorialize important figures who fought for equality and freedom, said Cornell scholars at the Feb. 16 Community Conversation at Tompkins County Public Library, "Black History Month: Is it Still Needed, Where Do We Go From Here?"

Negro History week was founded in 1926 "as a means of bringing to the attention of the country, indeed the world, that black people played a key role in the development of world civilization," said Robert L. Harris Jr., professor of African-American history and former vice provost for diversity and faculty development at Cornell. It became Black History Month in 1976.

Margaret Washington, professor of history, said that celebrating the 150th anniversary of the Emancipation Proclamation is "mainly symbolic … in terms of what it did for black freedom." However, she stressed, "one shouldn't de-emphasize the symbolism," recognizing the importance of the proclamation as "the beginning of the end of slavery."

In addition to remembering historical turning points and figures like Martin Luther King Jr., the speakers acknowledged the importance of "nameless" individuals who fought for equality. Harris encouraged the public to remember those who "made the decision that they were no longer going to tolerate the injustice that was taking place in this country."

Studying black history more deeply also allows us to "look beyond those popular figures, popular names and look at the individuals who helped sustain the movement[s]," he added.

As for how Negro History Week/Black History Month has changed over the years, Washington said, "In 1926 you did not read anything about African Americans," and "as far as scholars in academia were concerned, African-Americans had no history." However, the creation of the Association for the Study of Negro Life and History in 1915, and Negro History Week subsequently, began to create a space for black history and for black historians to publish, she said.

Harris added that the month-long celebration also has been used "as a means of inspiring black youth in particular to greater achievement. The more they know about their history and their past, the more they will strive for excellence."

The discussion was facilitated by Eric Kofi Acree, director of Cornell's Africana Library.

Abigail Warren '15 is a writer intern for the Cornell Chronicle.