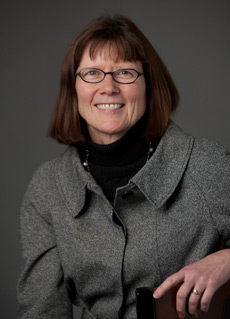 Judy Appleton, the Alfred H. Caspary Professor of Immunology in the Baker Institute for Animal Health and Associate Dean for Academic Affairs in the College of Veterinary Medicine, has been named a vice provost and will assume many of the responsibilities of Senior Vice Provost Ron Seeber, who is stepping down after eight years of service.

Provost Kent Fuchs announced the changes Feb. 23. "I hope you will join me in congratulating Judy on her new position and Ron on a job well done," he said, noting that Seeber was leaving "despite my protestations."

Appleton, he added, "has an impressive academic record and has been a highly effective leader, and I am thrilled that she accepted my offer."

Appleton was likewise pleased. "I am delighted to be given the opportunity to serve in a role that advances the mission of the university," she said. "Ron Seeber has set a very high bar in his term as vice provost."

Seeber plans to take an academic leave before returning to research and teaching as professor of industrial and labor relations. "I am a great supporter of the idea that faculty should contribute to the administration," he said, "but I also believe we should rotate back out again."

As vice provost, he has been responsible for land grant affairs, representing the university's four contract colleges in dealings with the State University of New York, overseeing the ROTC program, supporting the land-grant mission in all colleges and managing the Cornell Prison Education Program. Appleton will assume these duties.

Seeber also is responsible for the university's social science infrastructure units, which include the Survey Research Institute, Cornell Institute for Social and Economic Research, Institute for Social Sciences and Institute for Advancement of Economics. It's expected that at least some of these responsibilities will pass to Robert Buhrman, senior vice provost for research.

Appleton's academic career has centered on teaching and research in the field of immunology. Her particular interest is in the mechanism of immunity to infection by parasitic nematodes, a significant cause of disease in animals and people. Her work has broad applications to understanding both infection and allergy. "It will be a smaller research effort, but our studies are at a very exciting stage in addressing some long-standing questions regarding these immune responses," she said.

Appleton graduated from Indiana University in 1975 and received her M.S. in 1977 and Ph.D. in 1980 from the University of Georgia. All her degrees are in microbiology. She joined the Baker Institute at Cornell as a research associate in 1982 and became a faculty member in 1987.

Seeber received his B.S. in industrial engineering from Iowa State University in 1975, and his A.M. in 1977 and Ph.D. in 1981 from the Institute of Labor and Industrial Relations at the University of Illinois at Urbana-Champaign. He joined the Cornell faculty in 1980 and has taught courses in collective bargaining, negotiations and dispute resolution. He has served as an associate dean of the ILR School and was the director of ILR Extension from 1987 to 2000. In 1997 he and David Lipsky, the Anne Evans Estabrook Professor of Dispute Resolution, co-founded the Scheinman Institute on Conflict Resolution, and he continues as its co-director.