Provided
Sketches of the two extreme reconstructed postures of T. rex, wrong and right, show how the researchers measured the spinal angle of student drawings.

Ask a college student to sketch a Tyrannosaurus rex, and he or she will probably draw an upright, tail-dragging creature with tiny arms. An 8-year-old will likely draw something similar. They’re wrong, of course.

Paleontologists know it. Even Hollywood knows it – the makers of “Jurassic Park,” celebrating its 20th anniversary this year, did their best to portray anatomically correct dinosaurs. The star of the show, the terrible T. rex, was an agile, dynamic predator with a horizontal frame. This has been the view of most dinosaur scientists since the 1970s, and has increasingly been represented in textbooks and popular literature.

So why are students’ perceptions of the T. rex still stuck in the early 1900s, when T. rexes were depicted as upright, somewhat slow-moving tail draggers? A Cornell research team set out for answers after years of anecdotally observing students drawing the T. rex incorrectly.

Warren Allmon, the Hunter R. Rawlings III Professor of Paleontology in the Department of Earth and Atmospheric Sciences and director of the Cornell-affiliated Paleontological Research Institution (PRI); Robert Ross, adjunct assistant professor in the same department and PRI’s associate director for outreach; and Don Duggan-Haas, a PRI education research associate, have published their findings on this question in the Journal of Geoscience Education, to appear this month in print.

The answer, they say, is that despite decades of up-to-date dinosaur books, the imprinting of bad dinosaur anatomy at the earliest ages from unscientific sources, be they children’s shows like “Barney and Friends,” or dino-shaped chicken nuggets, is nearly impossible to overcome. This, combined with the general populace’s fascination with dinosaurs, has led to what the researchers call a “cultural inertia” in which outdated science remains in the public consciousness.

Since 2000, Ross has taught the course History of Life at Ithaca College, and almost invariably, students, when prompted, have drawn the T. rex upright with tail dragging. 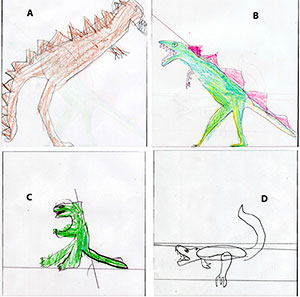 Provided
Drawings of T. rex by pre-college students visiting the Museum of the Earth. 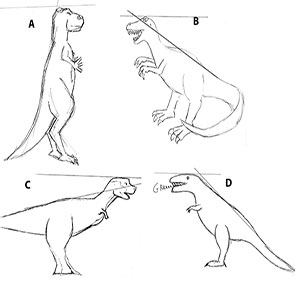 In 2006 he and Allmon decided to measure this phenomenon, along with similar experimentation with younger visitors to PRI’s Museum of the Earth.

They surveyed hundreds of students, and they found that 63 percent of pre-college and 72 percent of college-age students drew the upright T. rex. To quantify the observations, they measured the angle of the drawn T. rex spine from a horizontal surface, and found that most students drew it at an average angle of 50-60 degrees, falling within about 5 degrees of the incorrect posture.

The trend is, in a word, “bizarre,” Allmon said. After all, students today were born well after the so-called dinosaur renaissance of the 1960s and ’70s, when paleontology made dramatic reinterpretations of theropod dinosaur stance and metabolism. The T. rex’s original stance was first popularized in 1905 from the American Museum of Natural History’s collection. This T. rex inspired an art and pop culture romance with dinosaurs, including Charles R. Knight’s famous paintings.

The researchers first surmised that popular media, such as children’s books, had failed to catch up to the correct T. rex posture. Not quite so. “They were a little slow on the uptake, but not in sufficient degree to explain what we saw,” Ross said. So the researchers looked at representations in pop culture: toys, cookie cutters, T-shirts and other things small children would be exposed to early.

Many were in the old style and still are today: Think Barney the purple dinosaur, or Rex, the nervous T. rex from the “Toy Story” movies. “Our conclusion was that maybe students are imprinted with this image from their very earliest years. Even after they’ve seen ‘Jurassic Park,’ it doesn’t change,” Ross said.

The bottom line is that people aren’t blank slates, Allmon said. Science educators must recognize that students carry preconceptions, often undetected, into the classroom. T. rex just happens to be one of them.

“You have to meet students where they are, and start where they are. ... This is just another example of that,” Allmon said. “It’s one that still boggles my mind.”