Provided
Scan of a Florida gar: down through the spine, out to the inside surface of the interlocking sheath of heavy scales that encases a gar, and then into the central chamber of the gar's swim bladder, traveling all the way to the front of the swim bladder, just behind the head.

One of the great problems of evolution is to understand how the major features of organisms have changed over great swaths of time. How did limbs evolve from fins? How did bird feathers arise from scales?

The lung is a major organ of great functional importance for vertebrates (animals with backbones). Since the mid-19th century, most biologists have thought that in living fishes, gas bladders – internal bags of air to which fishes can add or eliminate oxygen to control buoyancy – are simply a modified version of an ancestral pair of lungs. Others think lungs and gas bladders are completely different organs.

New research at Cornell using computed tomography (CT) technology has gone a long way toward showing that lungs and gas bladders really are variations of the same organ.

By proving that several ray-finned fishes, namely sturgeons and paddlefishes, as well as bowfin, have pulmonary arteries like those that supply the lungs of vertebrates, the researchers show that the common ancestor of all these fishes must have originally had lungs supplied by a pulmonary artery. 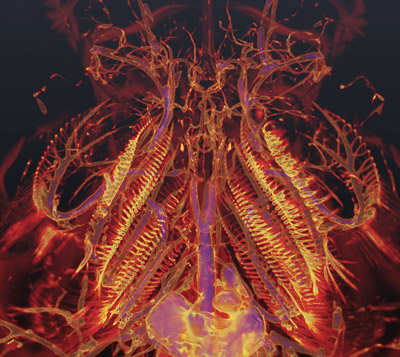 Provided
The vascular system of a sturgeon, with the arteries injected with X-ray opaque barium. The gills, which are serviced by many small blood vessels, are visible.

The micro-CT enabled researchers to look at resolutions of 25 microns, about the width of a human hair. “This is biology as we’ve never been able to see it before,” said Amy McCune, co-author of the study and professor and chair of ecology and evolutionary biology. “We’re studying biological diversity from the inside out.”

The paper’s lead author, Sarah Longo ’11, a graduate student at the University of California-Davis, began the research for her honors thesis with McCune. Mark Riccio, director of the Cornell Multiscale CT Facility in the Institute of Biotechnology, is also a co-author; the paper was published Feb. 5 in the online version of the Journal of Morphology.

“Using our state-of-the-art, high-resolution X-ray CT scanners, we noninvasively created 3-dimensional datasets that could be examined from multiple perspectives,” explained Riccio. By studying the CT scans of blood vessels filled with X-ray opaque barium in lungfishes, bowfin and several other related fishes, the Cornell researchers showed that other fishes in the lineage that includes bowfin actually have tiny vestigial pulmonary arteries, which branch off from a parent vessel in the same way that pulmonary arteries branch in tetrapods and lungfishes. The arteries in gas bladder fish, therefore, are actually vestigial pulmonary arteries that have been co-opted for new functions. The researchers hypothesize that this evolutionary change occurred either by the loss of respiration or by dorsal shifts in the anatomical structures of these fishes.

Longo points out that scientists have known about the vestigial arteries for a long time, but because traditional dissection and corrosive casting techniques lose detail, no one made the connection with pulmonary arteries. “One of the great things about this research was that by using a new technique and having an undergraduate look at it with fresh eyes we found something new,” says Longo.

The CT research was supported by a grant from the College of Arts and Sciences.

QuickTime video of the scan of a Florida gar