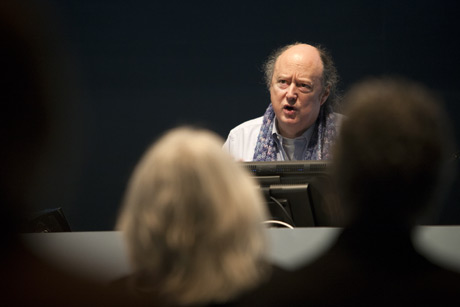 Lindsay France/University Photography
Clifford Lynch, executive director of the Coalition for Networked Information, speaks at a faculty forum on the future of research libraries in Milstein Hall Feb. 14.

What will a research library look like in five, 10 or 25 years?

Much different than it looks now - but it hinges on the future of the university itself, according to panelists at a Feb. 14 faculty forum in Milstein Hall.

The panel featured Clifford Lynch, executive director of the Coalition for Networked Information, and Wendy Lougee, university librarian and McKnight Presidential Professor at the University of Minnesota. Narissa Russell, chair of the Faculty Library Advisory Board and chair of the anthropology department introduced the talk, and Anne Kenney, the Carl A. Kroch University Librarian, took questions with Lynch and Lougee at the end.

Lynch noted that the future of libraries and universities are inextricably intertwined. "Research libraries do not have an intrinsic destiny that's independent of the things that go on around it," he said. "We need to ask questions about how are the practices of scholars changing. … Because, after all, the library is there to facilitate the transmission and preservation and organization of that knowledge, and as knowledge itself changes, the library must change with it."

Lougee discussed the forces of change in libraries, addressing the idea of "diffuse libraries" that serve a widely diverse community. Heading up a research library involves predicting the future, she said, and "sometimes we delight and sometimes we displease. We have the potential to be deeply engaged in every aspect of the knowledge process, from discovery to creation to sharing to preserving. We're no longer thinking just about stewardship."

Lynch and Lougee traced key changes in libraries and singled out multiple examples at Cornell that contributed to academic openness. Lynch noted that the preprint, open-access repository arXiv, for example, allows researchers in physics and other scientific fields to access papers throughout the cycle of knowledge creation - not just after their publication.

In response to a faculty member's question about the library's role, Kenney addressed another area of faculty-library intersection: teaching students information skills. She said undergraduates come to the library in droves, with 4 million visits to Cornell's library buildings every year, and she suggested that faculty "infuse information competency into their curricula" to make sure students develop their critical thinking and research skills.

Kenney noted that 60 percent of the library's collections budget at Cornell goes to licensing electronic content, and half of that goes to only four publishers. Lynch assured the audience that print collections, particularly special and rare collections, would not disappear, but that new scholarship will bring about more openness and changes in old systems.

"Scholarship doesn't happen in a vacuum," he said. "All of this bears a complex relationship to society and the expectations the society has about scholarship and scholarly communication."

Gwen Glazer is the staff writer/editor for Cornell University Library.