On his way to campus, Aaron Sachs regularly walks through the City Cemetery, once known as Silvan Hill and, unofficially, Mount Repose. This is where he begins his new book, "Arcadian America: The Death and Life of an Environmental Tradition" (Yale University Press), the story of how death initially gave life to America's parks.

The associate professor of history and American studies argues that cemeteries embody a forgotten landscape tradition in America and that we can learn from their history.

"As I was finishing my first book on scientist-explorers in the 19th century, I began to wonder, what was going on in the cities?" Sachs said. "These explorers were going off to wild frontiers … But what about those back in the core of society? I had kind of constructed the idea of cities as these awful places at the root of development and capitalism and industrial civilization. I thought there must be some good ideas there too. Who came up with urban parks, and why? 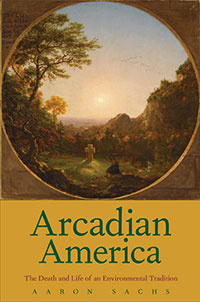 "One thing you learn as a scholar very quickly is you don't know anything," he said. "It was then that I found out that cemeteries were the first urban parks. ... These not only predated parks, but really spurred and inspired parks."

The first garden cemetery, Mount Auburn, founded in 1831 near Cambridge, Mass., "became phenomenally popular within about five years," he said. "And then a trend started that is one of the most remarkable movements in landscape history. Virtually almost any city of any size, from Boston to St. Louis, established a similar kind of cemetery."

Garden cemeteries became instantly popular in mid-19th century cities; they gave visitors access to nature and a place for reflection.

"People really were feeling quite overwhelmed by cities," Sachs said. "The overcrowding and modern bustle of factories, people were just not used to and were looking for ways to escape that -- and cemeteries began to fill that need."

Mount Auburn, Laurel Hill in Philadelphia, Green-Wood in Brooklyn and other cemeteries "attracted all kinds of people from all classes," Sachs said. "We have records of workers from the mills going, and visitors from other cities, other states, other countries would seek out these places" -- often to visit the graves of famous people, "but more importantly, to experience this place as a landscape, a rural enclave in the midst of a city."

Proper urban parks, including Central Park in Manhattan, soon followed in the wake of their success. "By the 1840s and '50s, the observers of this trend started to say, clearly, we need parks. We don't have a need for more cemeteries, we should build a straight-up park," Sachs said.

"One of the things I love about these cemeteries is ... [they] were obviously shaped and designed artfully, but were designed in such a way that you were meant to get lost," Sachs said. "You literally wander around in circles. That in itself is a kind of wildness."

At that time in history, he said, death "was something that people talked about in a public way. The cemeteries were important public landscapes and reminders that we all share mortality."

In the second half of the book, Sachs sees death "gradually moving to more private spaces ... being taken out of the home and moved to hospitals and funeral parlors. And now we live in places that are completely sealed off from death."

Sachs presents a blend of historical narrative and personal memoir, and calls the book "a cultural history. I'm looking at how people's beliefs changed about death, and how the landscapes themselves changed."