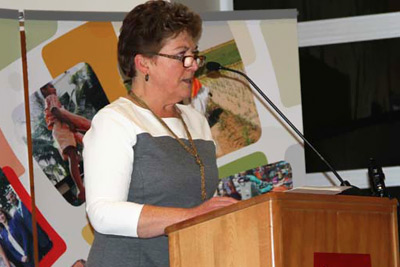 Provided
Kathryn Boor, the Ronald P. Lynch Dean of the College of Agriculture and Life Sciences, talks about the future for CALS in internationalization strategies at Cornell during IP-CALS 50th launch, Feb. 15.

For more than 50 years, international work in the College of Agriculture and Life Sciences (CALS) has helped improve crops and relieve poverty and malnutrition around the world. More than 175 people gathered Feb. 15 in Mann Library to celebrate International Programs (IP)-CALS 50th anniversary.

Larry Zuidema, former associate director of IP, noted some of IPs successes over the years, including:

Ronnie Coffman, IP-CALS director, noted that partnerships with the Ford and Rockefeller foundations provided major financial support for IP-CALS in the early years, and that the IP-CALS partnership with U.S. Agency for International Development provided the institution-building support involving CALS and the University of the Philippines College of Agriculture at Los Baños -- "perhaps one of IP-CALS' greatest success stories."

Kathryn Boor, the Ronald P. Lynch Dean of CALS, said in her keynote address that she was optimistic but cautious about the future. Since the 1920s, when CALS' plant breeders successfully partnered with colleagues in China to increase yields of rice and wheat, she said "nearly 6 billion people have adequate calories today, up from about 2 billion 50 years ago."

She also noted that from the 1940s to the '70s, "investments in agricultural research in North America and Western Europe increased productivity faster than growth in demand for food, resulting in overall reductions in food prices." Elsewhere, the Green Revolution led to "similarly significant" increases in food production that largely kept pace with a rapidly expanding population, contributing significantly to food security and in many cases preventing widespread starvation.

Nevertheless, some 870 million people are chronically undernourished and some 2 billion suffer from significant nutritional deficiencies "significant enough to impact mental and physical development in children," she noted.

In looking toward the future, Boor said that CALS will seek "to devise new ways to enhance the quality of unusable soils; augment the genetic potential of farming systems; increase the availability of safe water for drinking and irrigation; and reduce crop losses due to disease, insects and competition from weeds and predators."

Sarah Davidson Evanega, the senior associate director of IP-CALS, noted that one of IP-CALS newest initiatives is "Advancing Women in Agriculture through Research and Education." It is "imperative," she said, that gender be considered in all IP-CALS programs. She also outlined a full year's worth of events that IP-CALS is sponsoring to address future issues. (For more information about the events is available online).

In closing, Coffman noted, "The problems of food production in the world have never been greater." Over the next 50 years, "IP-CALS hopes to continue to help internationalize the Cornell faculty and student experience in meeting the growing needs of the world's poorest and most malnourished people."