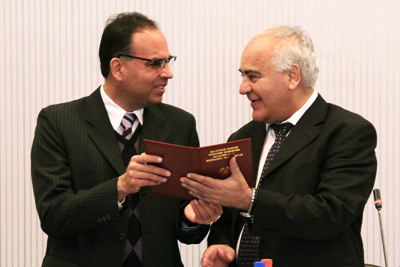 They may live on opposite sides of the world, but there's a lot that a farmer in the Pamir Mountains of Afghanistan can learn from an Iñupiat hunter in Wainwright, Alaska.

Karim-Aly Kassam, associate professor of natural resources and International Professor of Environmental and Indigenous Studies at Cornell, has made it his mission to facilitate connections between indigenous communities around the world so that together they can address local problems that transcend borders, such as food security and climate change.

Now he has been recognized internationally for his work, by being elected to the Academy of Sciences - in Tajikistan.

The honor was bestowed on Kassam in a ceremony in December. It included an appointment as English language editor of the academy's Journal of the Biological and Medical Sciences.

Kassam, also a senior research fellow at the University of Central Asia, was credited for his contributions to "generating and preserving unique knowledge and understanding of mountain communities."

The mountainous former Soviet republic in Central Asia is just one of many locations where Kassam and his graduate students work. The sites are often in high latitudes and high altitudes, and include the Semien Mountains, Ethiopia; Caucasus Mountains, Azerbaijan; Altay and Tian Shan Mountains of China; Namje, Nepal; and among indigenous communities in the United States.

He works with a team of seven postgraduate students interspersed throughout the world who connect via Skype to share their experiences and discuss how they could be used to tackle issues like food security in several diverse economical, cultural and environmental contexts.

"Our research here informs research there. Each place demands a different perspective, but there are also overarching issues and we can learn from each other," Kassam said. "It is very empowering. People have agency and they are helping each other directly; we are merely conduits that facilitate that connection."

His projects are driven by the pragmatic concerns of the communities where he works. His team is documenting the food basket of several geographic areas and determining potential changes - due to climate shifts or other factors - so that the indigenous communities there can build anticipatory capacities for change.

Kassam is one of five international professors affiliated with Cornell's American Indian Program (AIP). Director Jolene Rickard said he exemplifies the AIP mission of expanding the scope of research from a national focus on Native Americans to an international focus on indigenous peoples. The program seeks to encourage AIP faculty and staff to raise awareness about an estimated 370 million indigenous peoples in more than 90 countries, she said, and grant and stipend programs support student research and service projects as well.

Kassam said diversity is not an abstract concept for him; it's a necessity. It is also subtle.

"It's not an issue of looking good, it's an issue of survival - intellectual and physical," Kassam said. "It is a fundamental way of acting, of behaving."

He said he would like to see diversity incorporated into the fabric of Cornell in a real, fundamental way.

"If we are to be a land grant to the world, then let's start by understanding how most of the people of the world live, by directly engaging them in their context," Kassam said.