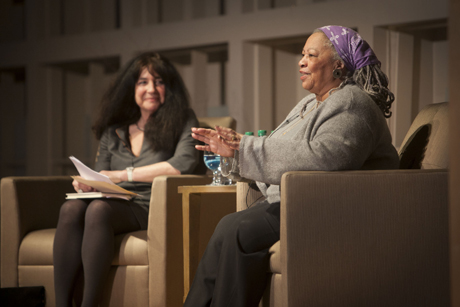 Evil is often portrayed with panache in 20th-century novels, as if it were wearing a top hat and a tuxedo and carrying a cane, and expresses itself with vivid, theatrical language, Toni Morrison, M.A. ’55, said at a talk March 7 at Cornell.

“That’s supposed to interest the reader. It’s not interesting to me,” the acclaimed author said to a rapt audience in Alice Statler Auditorium. “It’s too easy, if you get my drift. Goodness is really and truly hard. You can’t seduce it. So writing and trying to find language for it has been probably all I’ve ever done in the novel.”

The Nobel Prize-winning author returned to campus for a conversation about literature, politics and, especially, language. She answered questions posed to her by her longtime friend and colleague Claudia Brodsky, a professor of comparative literature at Princeton University, where Morrison is the Robert F. Goheen Chair Emerita in the Humanities.

Morrison peppered her observations with quips and references to F. Scott Fitzgerald, Shakespeare and Hemingway.

Recalling her days as a graduate student at Cornell, she remembered her professors, nonsectarian Sage Chapel, the beautiful landscape and the fresh (and often double-yolked) eggs from the “Ag School.”

When she began writing in the 1950s, much of African-American literature and poetry were responding to what Morrison called “the white gaze” – the idea of the white oppressor.

In her own writing, she did not.

“I thought, ‘I can’t do that.’ What is the world like if he’s not there? And the freedom, the open world that appears is stunning. ... There was this free space opened up by refusing to respond every minute to … somebody else’s gaze. So that flavored a great deal of what I was writing. It still does,” Morrison said.

That approach characterizes Morrison’s work, Brodsky noted. For example, her 2011 play “Desdemona” reimagines “Othello” from the point of view of Desdemona.

Morrison wasn’t out to copy Shakespeare’s language but rather sought to find her own expression of the character. “As soon as I knew how she felt about [her] name – ‘Desdemona’ means ‘doom’ or ‘dead’ and she said ‘I am not my name’ – there I had the quality of intelligence and I had the language,” Morrison said.

Language also defines Frank, the protagonist in her most recent novel, “Home.” The Korean War veteran returns from one battlefield only to have to survive in another: segregated, McCarthyist America. Brodsky noted that the novel never explicitly mentions Frank’s racial identity, but rather embeds it in the landscape of sociocultural signs, like segregated rest rooms, he must obey if he wants to make it safely across the country to his hometown.

At the same time, Morrison does something equally subtle, Brodsky said: She describes the landscape without any color until the very end, when Frank arrives home. The profound, bright color of acres of pink flowering cotton plants and brilliant trees were inspired, Morrison said, by the gardens of her own hometown. “So that when he returned, it is beautiful because of the color ... but also, it’s safe. … Nobody’s going to hurt you. And that was home. It’s not just a house. It’s a yearning for a place where you’re safe,” she said.

When an audience member asked what question she would ask if she could have it answered, Morrison said: “I don’t really have any questions. I have interests and I have imaginative journeys.”

She knew the answer to whether God exists when she was 11, she said. “A girl that I was talking to said he doesn’t exist. ... I said, ‘yes he does.’ She said, ‘no, he doesn’t.’ I said, ‘how do you know?’ She said, ‘Because I have been praying for blue eyes for two years and he didn’t deliver.’ So what do I get to get, 100 years later? I get to write a book, called ‘The Bluest Eye,’” she said, referring to her first novel.

The Africana Studies and Research Center and the Institute for German Cultural Studies co-hosted the event.