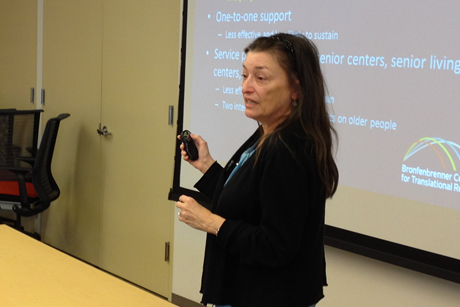 The devastating impact that natural disasters have on cities, people and communities is visually apparent, but the disproportionate effects of these disasters on the elderly is not as visible.

"Over half of the people who died in Hurricane Katrina were age 65 and older," said Elaine Wethington, professor of human development who is part of the Cornell Aging and the Environment Initiative. She discussed "Aging in the Age of Climate Change" with journalists March 5 at the ILR Conference Center in Manhattan.

Founded in 2008, the Cornell Aging and the Environment Initiative was the first major initiative in New York state to study aging and climate change. As global warming increases and the aging population grows, the initiative, which is affiliated with the Cornell Roybal Center for Translational Research on Aging, has investigated how older people will be affected by the climate change.

Older people are particularly vulnerable, Wethington noted, because many no longer drive and have difficulty using public transportation and are particularly sensitive to environmental pollutants, among other factors. They also tend to live "near areas that are vulnerable to storm effects in the United States," she said. Wethington recommends working through churches and community organizations to estimate how many elderly people live in neighborhoods that are vulnerable to storm damage.

The majority of elderly people who died during Hurricane Katrina, Wethington said, were trapped in their homes, and subsequently drowned or had heart attacks as their pre-existing health conditions were exacerbated. A similar pattern seems to have occurred in Hurricane Sandy, she said.

She also recommended that New York "shore up social infrastructure," she said, as the most underdiscussed risk factor in coping with disaster is social isolation.

The Cornell Roybal Center has studied extensively who becomes socially isolated. In the United States, people's social networks shrink as they age, and being widowed, childless, impoverished and having a disability are among the risk factors, Wethington said.

However, social isolation is partially driven by personal preference, which increases vulnerability for older people. They prefer to get help from a few close people instead of strangers, and from other older people versus younger people, Wethington added. Many live alone.

Calling it a "tough nut to crack," she said older people are less likely to follow evacuation orders. People want to protect their property, but "People are reluctant to seek services and to get help because it threatens their independence," Wethington said. "They have a desire to maintain their independence."

"Intervention in a family is not going to work if it's paternalistic or if the threat is to become less independent. Family members need to work with older people's desire to remain independent, and help them build up personal resilience factors."

Wethington's talk was part of Inside Cornell, a monthly series held in New York City featuring researchers and experts for members of the media.

Sylvia A. Harvey is a freelance writer in New York City.