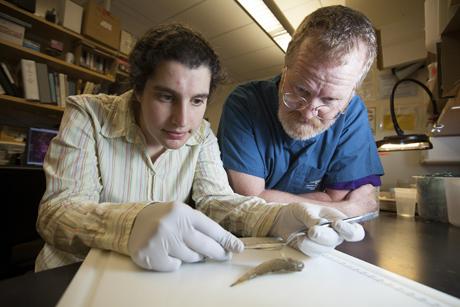 Lindsay France/University Photography
Emily Cornwell and Rod Getchell work with a sample fish at the College of Veterinary Medicine.

Cornell researchers have successfully identified the presence of a deadly virus - the viral hemorrhagic septicemia virus (VHSV) - by using techniques that are not lethal to fish.

The current method to test if a body of water has infected fish requires sampling the major organs from many indigenous fish, because of concerns that less invasive samples might not be sensitive enough to detect the virus. In a study published in March's Journal of Veterinary Diagnostic Investigation (25:2), VHSV was indeed detected from fin and gill tissue biopsies, which cause little harm to collect.

"We were concerned about how many fish we were sampling for surveillance," said graduate student Emily Cornwell, first author of the study. "Up until this point, all of our sampling was lethal. We want to avoid taking fish that are important for sport or that are protected."

Fish infected with VHSV display signs of external and internal bleeding, and commonly die within a few weeks. VHSV infection remains incurable, so minimizing its presence is paramount.

Testing fish for the European strains of VHSV from samples collected nonlethally has been possible since 2009. However, "The Great Lakes genotype has only been known since 2005, so its pathogenesis has not been as well-studied," said Cornwell. "Even though the viruses are similar, they have different hosts they can infect."

This less harmful sampling will allow for more thorough and long-term VHSV studies, such as tracking the disease's progression. "Fish can be asymptomatic, but then the infection can flare up. There are a lot of intricacies about the course of disease we don't understand," said Cornwell, who is in her fifth year of the dual DVM/Ph.D. program at Cornell.

To test whether the Great Lakes VHSV strain could be detected from less invasive samples, the researchers collected small clips of tissue from the fins and gills of fish injected with VHSV. RNA extracted from fins and gills revealed a viral presence as successfully as RNA from several internal organs -- the current, but lethal, sample.

The traditional method also only successfully identified the virus about 50 percent of the time in one of the fish types used in the study, even though the fish were exposed to a million copies of virus.

"The traditional viral isolation technique is not as sensitive, which is why we chose to inject the fish -- that way, we knew for sure that all of the fish were exposed," said Cornwell.

Regulations dictate that fish must be tested using the traditional viral isolation method, said Getchell. "For example, if you want to move fish from the Great Lakes -- a restricted area, you will have to use the approved techniques. The [new] molecular techniques, even though they're more sensitive, are not part of the regulations yet," said Getchell.

Getchell remains hopeful that this study will help "tip the world in the molecular direction. The evidence is mounting, so, slowly, the rules will change."

Luda Shtessel is a postdoctoral associate in Cornell's Department of Molecular Biology and Genetics.