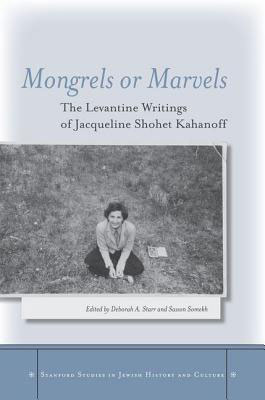 David Ben Gurion disapproved. Undeterred, Jacqueline Shohet Kahanoff promoted a peace for Israel that rested on the cultural bridge its Mizrahi citizens with roots in Arab countries could build to the rest of the Middle East. Levantinism, the social model Kahanoff created in 1959, advocated a pluralist, multicultural society in which Mizrahi and European Jews shared equally.

Levantinism is as applicable today as it was then and is enjoying a resurgence, says Deborah Starr, associate professor of Near Eastern studies and co-editor of "Mongrels or Marvels: The Levantine Writings of Jacqueline Shohet Kahanoff." Starr will discuss the book Tuesday, April 9, at 4:30 pm in Olin Library, Room 106G.

For the last 10 years, Starr and her co-editor, Sasson Somekh, professor emeritus of Arabic literature at Tel Aviv University, have been gathering the original versions of Kahanoff's work (although she wrote in English, the majority of her work was published in Hebrew). "We found ourselves in a strange position," says Starr, "because a couple of the pieces, including one of the Levantine essays, didn't have existing English originals. We had to translate back."

Kahanoff was born in Cairo in 1917 to a Francophone Jewish family and learned English from a British governess. The Cairo of her childhood was a cosmopolitan one, and the school she attended reinforced her experience of a multicultural, tolerant city; she later used this cosmopolitanism as her model for how Israeli society should develop, says Starr.

Her move to the United States in 1940 brought her into contact with thinkers who would deeply influence her later writing. While living in New York City she took courses at the New School for Social Research and became friends with such European intellectuals as Raymond Aaron and Claude Lévi-Strauss. It's even possible, says Starr, that the photo of Kahanoff used for the book's cover might have been taken by Lévi-Strauss.

Kahonoff resettled in Israel in 1954 after a sojourn in Paris. A noted cultural and literary critic, she supported herself as a journalist. Her essays introducing Levantinism were published in Keshet, an Israeli journal whose writers provided a counter-narrative to Zionism by emphasizing the long history of Jews throughout the region. Kahanoff used personalized essays to represent the marginalized voices of Eastern Jews, an unusual writing style that was -- and is -- highly accessible to readers, says Starr.

Recently there has been a resurgence of interest in Kahanoff's work, says Starr, partly sparked by Israeli novelist Ronit Matalon's novel "The One Facing Us." The novel includes two of Kahanoff's Levantine essays, and Kahanoff herself appears as a character. As Starr and Somekh point out in their introduction, "Levantinism, as transformed in meaning by Kahanoff, has encouraged Jewish intellectuals in Israel of Middle Eastern origin to search for artistic means by which to express their own complex identities."

Though two Hebrew anthologies have been published (one partly based on Starr and Somekh's research), "Mongrels and Marvels" is the first collection in English of Kahanoff's work.

"One hopes that voices advocating coexistence can mitigate some of the divisiveness in Israel, and that's where Kahanoff's work remains relevant," says Starr.