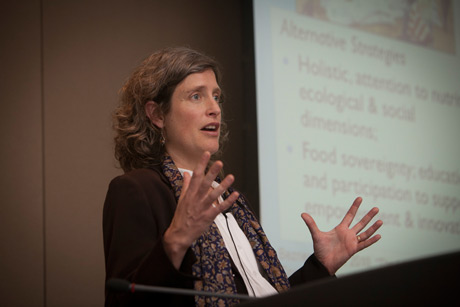 The social sciences have a critical role in sustainability research, asserted Professor Kim Weeden, the Robert S. Harrison Director of the Institute for the Social Sciences, Feb. 21 at the Third Annual Young Social Scientists' Sustainability Research Forum at the ILR Conference Center, where six faculty members presented their research.

Take biofuels, for example. Public policies that promote biofuels and reduce greenhouse gas emissions have had significant negative impacts, according to research by David Just, associate professor of applied economics and management. His work shows that such policies can dramatically increase food prices, he said.

In a study on the social impact of microcredit programs offering collateral-free lending in developing countries, economic sociologist Paromita Sanyal, assistant professor of sociology, said that she found that women tend to benefit more from group-based microcredit programs than from loans and female-entrepreneurship.

"It's too early to determine the sustainability of the empowerment gains," she said, but the intergenerational impact of children seeing their mother involved in business enterprises, for example, and participating in group meetings, among other factors, will be better understood, over time.

Speaking of her work at Malawi, where corn is the predominant crop, Rachel Bezner Kerr, assistant professor of development sociology, said that she and her collaborators are encouraging farmers to expand their crops to include such intercropping legumes as peanuts and pigeon peas, and to rotate the legumes with corn to improve soil fertility and food security.

"We've been able to show that an increase in biodiversity has multiple impacts, including more grain and soil cover, as well as increases in child growth and weight," she said.

Sera Young, a research scientist in nutritional sciences, said that her team in Mozambique, one of the inaugural studies of the CARE-Cornell partnership, is using performance-based incentives to encourage clinical staff and community health workers to help prevent transmission of HIV in infants. In Africa, a child is infected every 1.5 minutes, she said. In Tororo, Uganda, she said that her group has just concluded the first macronutrient study in HIV-infected pregnant women. And in Gulu, Uganda, the team is studying the relationship between food security, maternal psychosocial health and gestational weight gain.

Richard Stedman, associate professor of natural resources, addressed the sustainability and resilience of resource-dependent communities. And to provide a historical perspective, Suman Seth, associate professor of science and technology studies, shared his findings on the public perceptions of climate, disease and race from 1676 to 1800.

The forum was jointly sponsored by the Institute for the Social Sciences and the Atkinson Center for a Sustainable Future. A video of the presentations will be available at http://www.socialsciences.cornell.edu.

Lori Sonken is the event coordinator for Cornell's Institute for the Social Sciences.