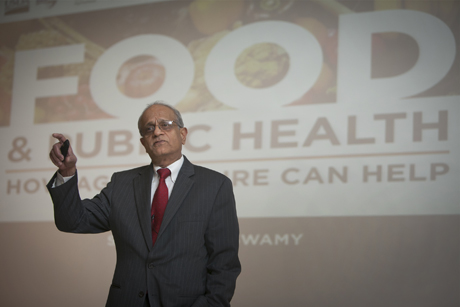 According to recent studies, children born in 2000 will have a shorter life span than their parents. The latest laws restricting trans fats and soda have sparked a rush of controversy. And if we continue on our current path, by 2050 we'll need two more Earths to sustain our increasing population, according to a federal expert.

"If you're going to live like an American, you'll need four more Earths," said Sonny Ramaswamy, director of the U.S. Department of Agriculture's National Institute of Food and Agriculture, in presenting "Food and Public Health: How Agriculture Can Help Lead to Healthy Outcomes for a Growing Global Population" on campus March 7.

Ramaswamy said that a multidimensional approach is needed to combat such 21st century "wicked problems" as population growth, health, poverty and the environment. He said land-grant universities' research is critical to advancing food technology.

"That's our overall goal ... [to] enable the work that's being done at institutions like Cornell in the food, agriculture, natural resources and human sciences areas," said Ramaswamy.

Ramaswamy pointed to a recent breakthrough by Cornell researchers with the Scarecrow gene, for example, which leads to more efficient photosynthesis in plants. Discovery of the gene could lead to new varieties of staple crops with 50 percent higher yields.

Cornell, as well as other institutions, he said, also grapple with such issues as the lack of vitamin A and iron in rice and arsenic contamination in rice; genetically altering traits in animals to minimize health risks to humans; and modifying food to enhance shelf-life and nutritional content.

Increasing opportunities for young people in applied agriculture at schools like Cornell is crucial, Ramaswamy said: "The farming enterprise, the ranching enterprise [are among] the most difficult. We've got to get young people in there. Why should a young person go into the farming business while they could go work at a bank or in air-conditioned comfort?"

Ramaswamy also discussed how researchers lay the groundwork for public policy with data, but it is the role of those working in the field of human studies to actually determine which policies should be implemented. "Having social scientists work with the physical scientists, the nexus between those, is a very critical part of this," he said.

In conclusion, Ramaswamy told of his hopes for new technology to reform today's sedentary children. "We've got 'My Plate,' [the official USDA food guide] ... that's the brand new thing that replaces 'My Pyramid' ... But my question to you really is, can there be a 'My Lifestyle' or can there be a 'My Behavior'? ... How do you get someone from Cornell University to think of some apps that would go in that get kids … actually up and getting around?" he asked.

The event was sponsored by the College of Agriculture and Life Sciences.