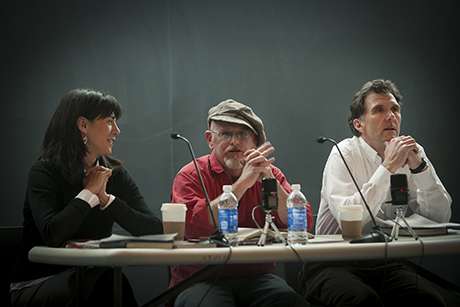 Hydraulic fracturing (often referred to as “fracking”) is not just an issue related to the global economy and national politics, but a local issue that begins with communities and the land they live on, stressed two investigative journalist/authors speaking at a public forum, “Fracking and the Future of Global Energy: Golden Age or Dark Age?” on campus April 4.

The future of fracking – the extraction of natural resources, often natural gas, from shale formations more than a mile below ground level, has become a hotly contested issue because of its potential environmental consequences.

“There is no issue in the United States today that more clearly demonstrates the deep divisions, the tremendous potential and the incredible obstinacy that we face,” said Seamus McGraw, author of “End of Country” and a recipient of the Freedom of Information Award from the Associated Press Managing Editors.

Tom Wilber, author of “Under the Surface” and curator of the Shale Gas Review, a blog covering Marcellus and Utica shale gas development, recounted the story of Norma Fiorentino, a resident who allowed a $600 million extraction campaign to drill on her land in exchange for royalties. Following complications involving debris in the mining site, a build-up of methane caused a well on Fiorentino’s property to explode. Wilber detailed numerous fatalities caused by this process, known as methane migration.

Both McGraw and Wilber called for greater regulation of the natural gas industry.

The natural gas industry is currently exempt from the Clean Drinking Act, which would regulate the chemicals natural gas extraction may leak into the ground, Wilber said.

McGraw advocated for “a progressive tax structure that penalizes [corporations] for doing the things we don’t want them to do.”

Both speakers noted a forthcoming national study by the Environmental Protection Agency on the effects of fracking on groundwater. “Whether the federal government will have the incentive or justification for regulating this has a lot to do with the outcome of this report,” Wilber said, noting that the final report will be released in 2014.

McGraw lamented the politicization of fracking. One’s position on fracking, he said, is often indicative of their positions on “half a dozen other hot-button issues.” McGraw labeled the grouping of fracking with other highly partisan issues as a “tragedy.”

The Atkinson Center for a Sustainable Future and Cornell University Press co-sponsored the forum.

Sam Wolken ’14 is a student writer intern for the Cornell Chronicle.