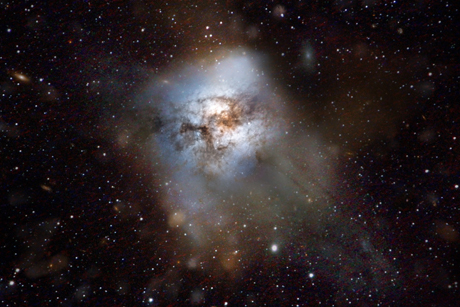 ESA, C. Carreau
An artist's rendering of starburst galaxy HFLS3, which is making stars at one of the highest rates ever seen in any galaxy.

A Cornell researcher and his team have uncovered an oddity in the early cosmos: A newly discovered distant galaxy, born just after the big bang, is starting to furiously churn out stars at peak capacity – despite its young age.

The unique galaxy is forming 2,000 times the number of stars as our own Milky Way. “But it’s doing so only 880 million years after the big bang, when the universe was just 6 percent of its current age,” says Dominik Riechers, assistant professor of astronomy, in the April 18 issue of Nature.

“This was very surprising, because we know massive galaxies forming lots of stars can exist at some later point in time. But this early on, they haven’t been seen before,” said Riechers. “Predictions from cosmological models are at odds with finding this type of galaxy very early on in the life of the universe. The models predict we would find close to zero, so we were hoping to find an extreme galaxy like this, but we couldn’t count on it.”

The galaxy, named HFLS3, has 35 billion stars, about half as many as the Milky Way. But it has the potential to make 100 billion more with its plentiful gas. In time the galaxy will merge with others to form a much more massive galaxy, Riechers said. “In the center of galaxy clusters today, you usually see big elliptical galaxies that are very, very massive. And this is what this galaxy is likely to become.”

A team of 64 researchers from Europe and the United States uncovered the outlier by analyzing data from the largest, most powerful infrared telescope ever flown in space, the European Space Agency’s (ESA) Herschel Space Observatory. 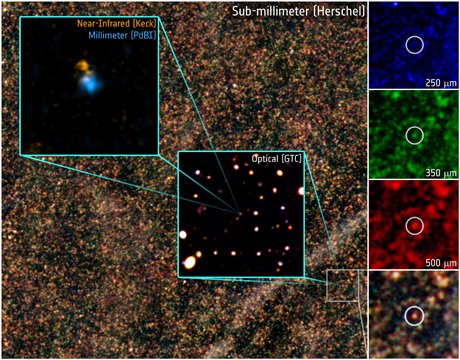 Stars are formed out of dust and gas, and just after stars are formed, they emit luminous ultraviolet/blue light. But the dust around them left over from their formation acts as a screen and absorbs that light and re-emits it at longer infrared wavelengths. Herschel can detect light at these wavelengths, pointing astronomers to dense gas where new stars are forming.

Herschel is the ideal instrument to detect the dust heated by these stars. “The more young stars are formed, the more dust usually obscures them, and the brighter the galaxy will look in the long infrared wavelength that Herschel targets,” Riechers added.

Herschel spent 800 hours peering into the distant universe, resulting in a map of an enormous swath of the sky called the Herschel Multi-tiered Extra-galactic Survey (HerMES). The survey revealed tens of thousands of new galaxies. Most showed up on the map as light red, indicating their distance from Earth.

But one galaxy – HFLS3 – appeared much redder than the others, indicating it was much farther away. “That’s what gained our interest,” Riechers said. “It was the most promising candidate.”

To measure its distance, they used several large millimeter interferometers – telescopes that measure the molecular gases, such as water, carbon monoxide, hydroxyl and ammonia, that form stars. By measuring the wavelength of the gases’ emissions, Riechers and his team inferred the distance to the galaxy.

By itself, the galaxy doesn’t break the models astronomers use to understand the beginnings of the universe. But if Riechers and others find only a few more, together they could, Riechers said.

“This is a hint that the predictions that we get from models might not be as accurate as we had thought,” he said. “This could be the pink elephant that’s different from everything else in the early universe. But it could also simply be that we missed them before because we didn’t know how to find them.”

Thanks to a Cornell-led consortium, Riechers and others will continue the hunt for similar galaxies using even better data. The consortium is planning to build the Cerro Chajnantor Atacama Telescope (CCAT), which will be one of the highest permanent, ground-based telescopes in the world. The 25-meter telescope for submillimeter astronomy will perch at 5,600 meters in northern Chile. Construction is scheduled to start this year and finish in 2017.

The study was supported, in part, by NASA and the ESA.