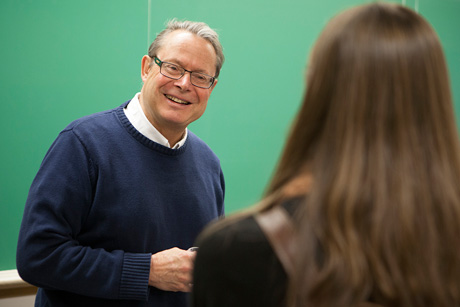 On the inaugural Earth Day 43 years ago, 12,000 events were held around the country. Two-thirds of Congress spoke at an Earth Day ceremony, and several environmental acts were born. Today, politicians are directing dollars away from conservation efforts, environmentalists are seen as “preachy,” and the environment and economic development are frequently in conflict.

So said The Nature Conservancy’s chief scientist, Peter Kareiva, Ph.D. ’81, in delivering the Jill and Ken Iscol Distinguished Environmental Lecture April 22. He stressed that supporting large-scale restoration projects, collaborating with corporations and enlisting the energies of the younger generation could change the fate of our planet. Conservationists must “put people” back in nature by pointing out what’s good for the environment is good for humans, and that economic growth and environmental health are linked, he added.

People practice conservation not just to protect plants and animals, but to preserve nature as a valuable asset to society, Kareiva said, because a green infrastructure has multiple benefits. Quito, Ecuador, for example, had been suffering from a lack of water before taking advantage of a nature reserve nearby. It started paying “for conservation upstream [and] managing that land way upstream, to deliver their supply of water. That’s green infrastructure,” he said. Due to this success, funding has been provided for 32 more water conservation projects in Latin America.

Kareiva also noted that, in reference to oyster reef restoration in the Gulf of Mexico, each mile of restoration costs $1 million, yet economists have estimated that the reefs pay for themselves in 10 years.

“These oyster reefs do so many things … they are fisheries, they trap sediment, they reduce storm damage … [and] they provide livelihoods,” Kareiva said. Restoring 500 miles of reef is possible, Kareiva said, emphasizing that bigger is better in terms of restoration projects, as these have greater impacts.

Environmentalists should work collaboratively with large corporations instead of demonizing them, Kareiva noted. Research with Dow engineers showed that the company would save money by restoring hardwood forests to reduce nitrogen oxide. Kareiva highlighted how companies usually benefit by working ecologically, citing a Harvard Business School study that found a 30 percent greater investor yield for sustainable corporations. These companies not only protect their supply chain, but also gain social capital and a happier employee and consumer base. “We can have the value that we want nature, and we can have the value that we want economic growth. They’re not mutually exclusive; you can have both values,” Kareiva said.

The younger generation needs to become involved in conservation, and we should support their ideas, Kareiva said, noting that children get excited about nature at an early age and embrace technology, pointing to how inner-city children who serve as field assistants at nature reserves tend to become science majors. Cell phones, he added, could become an integral part of conservation: “Cell phones can collect data, they have spatial coordinates … instead of telling kids to unplug, tell them to plug in, and use their cell phones in a creative way.”

Concluding, Kareiva said, “Sometimes I feel like we’ve accepted being in the position of managing the decline of the planet. … We can do a lot better. We can envision a pretty ambitious future. But if we’re going to do that, we have to rethink a lot of stuff.”