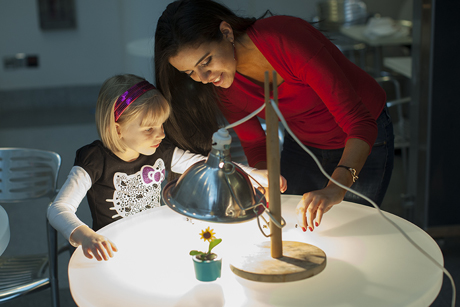 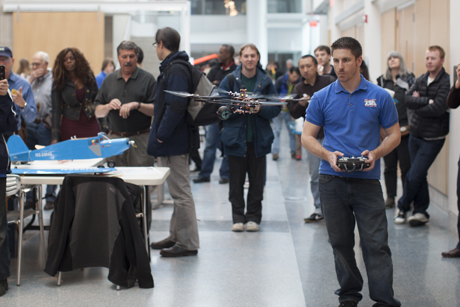 From viewing 19-foot hang gliders to making 19-inch walk-along gliders, visitors to the first Aeronautics/Alternative Energy Expo in Clark Hall March 28 got to experience the real challenge of catching a breeze.

The event was a collaborative effort between the Cornell Chapter of the American Institute of Aeronautics and Astronautics (AIAA) and Xraise, the outreach program at the Cornell Laboratory for Accelerator-based Science and Education (CLASSE).

“Xraise, in collaboration with AIAA, hopes to inspire community creativity, raise awareness about alternative energy and aeronautics, and expose our next generation of scientists and engineers to the joy of scientific exploration and the possibilities of the future,” said Asta Li ’16, public relations and outreach director of the Cornell Chapter of AIAA.

Also at the event, the Technology Student Association (TSA) from Ithaca High School provided several interactive exhibits. Student president Anton Volkmann displayed his fog tornado, a refined version of the one he built as part of a summer internship with Xraise, while other TSA students showed off their vortex canon and quad copter.

Phone cameras were pulled out when TSA faculty adviser Bill Sauve flew his quad copter around the Atrium, carefully hovering near the crowd where spectators could see the four vertical propellers that allow the craft to smoothly lift, dip and turn any angle.

"Although I'm a physicist, it's always a challenge to explain difficult concepts like energy and electricity to my young children,” said Julia Thom-Levy, Cornell associate professor of physics who brought her children to the Expo. “The Wind/Aero Expo was a fantastic way to do just that. My son saw the home wind generator and could turn it himself to make lamps light up. I think a light went on in his head as well at that moment!”

The Expo, part of the Xraise outreach program’s second annual Wind Turbine Challenge, was one of three events planned for the public this spring.

The Wind Challenge Competition April 21 will encourage builders to test the torque and power generation capabilities of their wind turbines.

Lora K. Hine is director of Educational Programs at CLASSE.