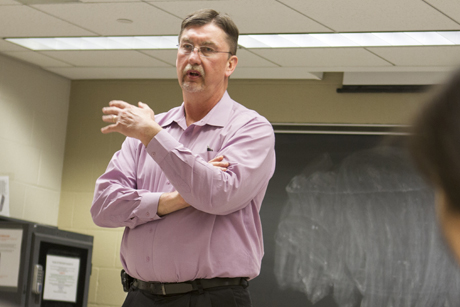 With annual revenue approaching $450 billion and a global workforce of more than 2 million, Walmart has long been a target of labor advocates not only because of its status as the world’s largest employer but also due to persisting claims of worker mistreatment.

A greeter for Walmart, “in his 60s or 70s, had blood clots in his legs. When he asked the manager for a stool to sit on, he refused,” said Pat O’Neill, executive vice president of the United Food and Commercial Workers Union (UFCW) in his ILR School talk April 10. This prompted Angela Williamson, a former Walmart employee, to camp out in front of the store for three days in solidarity.

“Finally, the manager relented, and the man, with tears in his eyes, asked the manager, ‘Am I going to get fired for this?’” said O’Neill, who spoke as part of ILR’s annual Union Days.

Stories such as this have prompted the UFCW to establish two campaigns, Wake Up Walmart and Making Change at Walmart, to enact worker-centric changes at the company.

One common concern among workers is scheduling. Workers have a certain number of tasks that they must accomplish during their typical workday. As is often the case in the workplace, some tasks end up taking longer than expected. Walmart, however, has a strict policy against overtime. Shelves are sometimes left unstocked. The union has been trying to get Walmart to change these and other policies.

Employees at a warehouse that supplied Walmart went on strike due to “horrible working conditions,” said O’Neill. “They were working in containments at up to 120 degrees with no cold water to drink, and they weren’t getting bathroom breaks.” At first Walmart refused to take responsibility since it did not directly employ the workers. Eventually, though, “Walmart was forced to take responsibility by the state of California” after the union intervened, said O’Neill.

The UFCW has tried to get workers to unionize, but the Walton family, owners of Walmart, has historically been anti-union. Thus it has been difficult reaching workers who often fear retaliation from management. However, Walmart is not the only corporation to take such a strong opposing view of unions.

“We had one worker that was trying to get something going in San Diego,” said O’Neill, and in an example “of corporate America and their overreaction,” the company had a law firm hold meetings in their stores in California and Nevada, “just because one worker said something about forming a union.”

However, the union has recently made some headway, including getting Walmart to drop support for the American Legislative Exchange Council, a conservative organization that writes legislation for states. O’Neill says these changes show that “if they do stand together, if they do make petitions, if they do march on bosses, things get changed.”

Mikhail Yakhnis ’14 is a writer intern for the Cornell Chronicle.