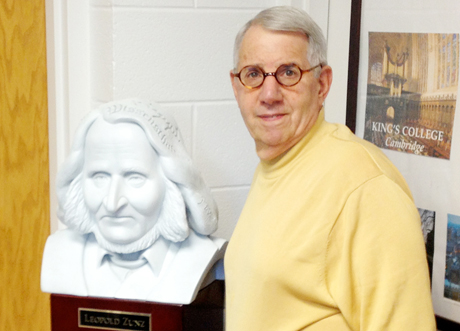 A comprehensive archive of published works by a pioneer of modern Jewish thought has arrived at Cornell University Library. Thanks to a donation from Rabbi Steven M. Glazer, researchers around the world will now have access to the complete collection of works written by German-Jewish scholar Leopold Zunz.

“I chose Cornell … because the library makes its extensive rare collections widely accessible,” Glazer said. “At Cornell, the books will actually be consulted and not merely occupy shelf space, and that pleases me very much.”

Zunz (1794-1886) was instrumental in laying the foundation for the scholarly study of Judaism, known as Wissenschaft des Judentums.

“Together with a small group of Jewish scholars, Zunz began to apply the critical techniques of modern German historical and philological scholarship to the study of Judaism,” said Vicki Caron, the Diann G. and Thomas A. Mann Professor of Modern Jewish Studies at Cornell. “His scholarship was prodigious, and although he published on a wide range of topics, his principal focus was rabbinic literature and culture.”

The Steven M. Glazer Collection of Leopold Zunz Material contains more than 100 works, including all the editions of Zunz’s works, major and minor, in the original German and in English translation.

The collection also contains books written by Zunz’s contemporaries and those dedicated to him, as well as a great deal of background information in primary and secondary texts. Several art objects are also part of the collection: a lithographic print of Zunz’s image, trading cards of Zunz, his obituary, a whimsical bust and – Glazer’s “prize possession” – a framed collection of 10 short handwritten notes and a printed note thanking friends who acknowledged Zunz’s 70th birthday.

“The collection brings scholars into immediate contact with both the material and the intellectual evidence of the scholarship of Leopold Zunz,” said Patrick J. Stevens, selector for Jewish studies and curator for antiquarian Judaica at Cornell University Library. “Together with our collections of the papers of Guido Kisch and Cornell’s own Professor Isaac Rabinowitz, the collection on Leopold Zunz adds significantly to the Rare and Manuscript Collections at Cornell as a research library for the academic study of the Jewish texts and Jewish history.”

Caron concurs on Zunz’s enduring influence: “As a result of Zunz's scholarship, the stature of Jewish history grew enormously in the eyes of Jews and non-Jews alike. This collection, which will shed new light on the way in which Jewish historical scholarship became linked to the struggle for Jewish emancipation in Germany, will serve as an invaluable resource for faculty and students at Cornell, as well as scholars of Judaism and religion more generally throughout the world.”

Glazer leads Congregation Beth Emeth in Herndon, Va., and teaches at George Washington University. He spent decades researching Zunz while assembling his collection and is a longtime fan of the German scholar; his car bears a “Zunz” license plate and is affectionately called the “Zunzmobile.”