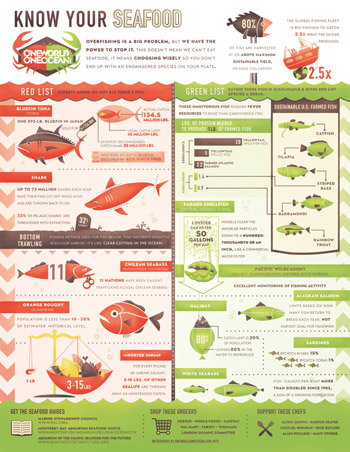 A recent report by the United Nations warned that nearly 60 percent of the world’s wild fisheries are “at or close to the limit” of being overexploited.

Fortunately scientists, policymakers and other stakeholders around the world are working to conserve marine ecosystems – including Cornell College of Agriculture and Life Sciences (CALS) student Katharine Leigh ’15, who has founded Green Catch: Sustaining the Blue by Catching Green.

Broadly, the program contributes to a campaign for more sustainable seafood. It began as a capstone Girl Scout Gold Award project in high school, and now Leigh hopes to make it a campuswide initiative.

As part of Green Catch, Leigh conducts education and outreach on campus and in the community, largely by visiting local middle schools to explain why sustainably caught seafood is important to protect the environment. At Cornell, she also has trained 12 fellow students to help in local schools.

By working with Cornell Dining, Leigh also has been involved in Cornell’s decision to collaborate with the Marine Stewardship Council (MSC), a certifying agency for sustainable seafood. Cornell was the first Ivy League school to be certified for its use of sustainable seafood in two of its dining halls, receiving a MSC Custodial Certification.

So far, Robert Purcell Marketplace Eatery and the Keeton House dining room have been approved to use the sustainable seafood MSC Ecolabel on some entrees. Cornell Dining has said it plans to expand the program by 2015, and Leigh envisions a campuswide initiative for sustainable seafood products at all Cornell dining facilities.

She also helped organize a Make Your Own Sustainable Sushi Night at Robert Purcell in February.

Leigh is majoring in biology with a concentration in marine biology, an interest that stems from growing up in California and visiting the Monterey Bay Aquarium on vacations.

“I remember I would spend hours viewing the exhibits. When I finally got up the courage to go next door to Stanford’s Hopkins Marine Research Center, the librarian welcomed me with open arms, answered all of my questions and introduced me to the researchers – even one I saw on the Discovery Channel in our hotel room,” Leigh said.

Green Catch formed as a result of a collaboration between Leigh and the Monterey Bay Aquarium organization Seafood Watch.

“My first goal was to make sure people know what sustainable seafood means, to get people talking about it. Now, we need to get people eating it,” she said.

Rebecca Harrison ’14 is a student writer for the College of Agriculture and Life Sciences.

Cornell is first Ivy to be certified for sustainable seafood