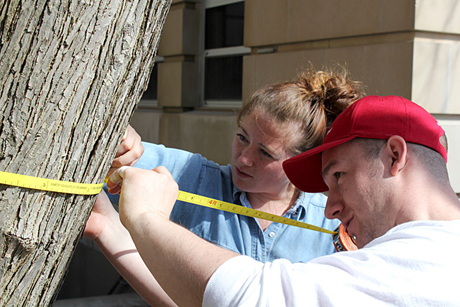 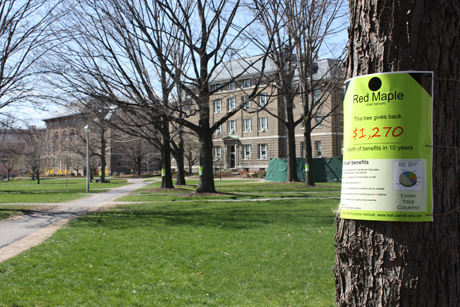 Craig Cramer
Trees around the ag quad have been marked with bright green price tags to raise awareness about their economic and environmental value as part of a student project for Arbor Day.

This Arbor Day (April 26) Cornell horticulture students are hoping to highlight why trees are worth hugging, by hanging bright green “price tags” on trunks around the Ag Quad and in an Ithaca park.

Using an online tool, the National Tree Benefit Calculator, students from the course Creating the Urban Eden estimated the environmental and economic benefits of 29 trees based on their location, size and species.

A tall Japanese Zelkova tree in the center of the Ag Quad, for example, was valued at $1,730, for increasing property value, intercepting more than 2,500 gallons of potentially polluting storm water runoff, sequestering 573 pounds of atmospheric carbon, conserving 139 kilowatt hours of electricity for cooling and 49 therms of oil or natural gas, and providing air quality improvements.

The data is displayed on attention-grabbing, oversized tags designed by the students. Eight tags were also placed on trees in Thompson Park on Cayuga Street, where a city tree-planting ceremony will take place April 26.

“It’s really quite eye-opening for people who think that trees are just nice to look at and don’t have any other value,” said horticulture professor Nina Bassuk, who leads the class alongside landscape architecture professor Peter Trowbridge.

There are also benefits that are not easily quantified, such as wildlife habitats and emotional responses, Bassuk said.

Extension forester Peter Smallidge is also trying to draw attention to the value of trees statewide. As part of the Restore New York Woodlands campaign launched by the New York Forest Owners Association, he and several private forest owners will host woodland walks on the weekends of May 11 and 18.

New York is dominated by woodlands, Smallidge said. The state has approximately 30 million acres, and 18 million acres are forested. Almost 50 percent of the state is owned and managed by private woodland owners.

The good news: The state’s mature woodlands (begun in the late 1800s and early 1900s) are healthy, vigorous and robust, and more wood is grown than harvested. The bad news: Those trees will soon die and the next generation of young trees could be degraded by overabundant deer, invasive species and poor cutting practices, Smallidge said.

For example, a single deer that forages 6-8 pounds per day can eat almost 400,000 tree seedlings per year, and they tend to favor the same trees that we want to grow, Smallidge said.

“Unfortunately, because the hillsides remain green many people are deceived into thinking that all is well,” Smallidge said. “Without timely and comprehensive action, many of the environmental and economic benefits of our forests will be denied to future generations.”