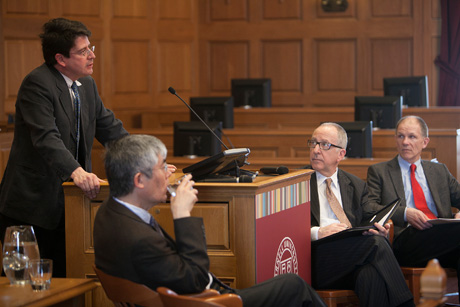 Highly educated immigrants are a fertile source of innovation, fresh ideas and business success, and their talents will continue to benefit the United States – if immigration laws can be modernized to let them stay in this country.

So said Cornell President David Skorton – whose father came from Belarus via Cuba – at an April 19 debate at the Law School. Cornell joined more than 75 colleges and universities to observe the National Day of Immigration Reform.

“Many of us have lost sight of the important contributions immigrants have made – and are making – to our culture and our economy,” Skorton said. “Their continued contributions are critical to our country’s success.”

Universities have a stake in the immigration reform debate, Skorton said. Cornell has 4,100 international students, nearly a fifth of the student body, who account for 44 percent of graduate students and 50 percent of graduates in STEM (science, technology, engineering, math) fields.

They go on to create jobs, Skorton said: One-fourth of high-tech jobs created between 1995 and 2005 had at least one immigrant founder, and in 2010, more than 40 percent of Fortune 500 companies were founded by an immigrant or the child of immigrants.

Moreover, the inventors of three-quarters of patents issued to top tech-producing universities in 2011 are immigrants, and highly educated immigrants receive patents at double the rate of U.S. natives. “If these immigrants were allowed to stay and work in the United States, their contributions to the nation and to innovation would stay and multiply,” Skorton said.

Skorton said that in 2018, there will be a shortage of nearly 250,000 STEM-educated workers in the United States – jobs that could be filled by U.S.-educated immigrants but for “antiquated” immigration laws that do not allow international graduates to stay. And immigrants brought to the United States as children, Skorton said, can’t continue their education beyond high school, serve in the military or get a driver’s license because of their undocumented status.

“By denying them the opportunity to advance their knowledge and skills through higher education, we further restrict their opportunities and decrease the supply of talent our nation so desperately needs,” he said, noting that he has supported the Dream Act to help these young people and that Cornell welcomes all students, including undocumented ones.

What of the “brain drain” on countries whose students are educated abroad and never return home? “National origin should not determine economic destiny, and we should be moving away from the old-fashioned model of a brain drain to a model of so-called ‘brain circulation’” in which skilled workers “move around the world freely to the benefit of all nations,” Skorton stressed.

Until that becomes widespread, Skorton said, comprehensive immigration reform “must include incentives for some of the talented individuals educated in the U.S. to return to their homelands to drive progress there.” Skorton called for immigration policies to offer green cards “to talented advanced graduates, especially but not only in STEM fields, who want to stay in the U.S., while encouraging others to return home with the best education we can offer.”

Immigration scholar and law professor Hiroshi Motomura of the University of California, Los Angeles, said the “path to citizenship” debate is a lens on the larger immigration debate spurred by rapidly changing political and demographic realities.

“My own view is that it is true that any government, any nation, has the capacity and the moral right to … decide its immigration policies,” Motomura said. But “If you just legalize people, you’re airbrushing the problem away. The problem being the system doesn’t work.”

Michael Jones-Correa, professor of government, who noted that his wife, a Harvard University graduate, is the daughter of a Greek immigrant, said: “All immigrants have potential, and if not for themselves then for their children … this is an argument for not focusing simply on the highly skilled.”

The event is part of Cornell’s 2013 Immigration and Democracy Speaker Series sponsored by the Cornell Institute for European Studies, Cornell Law School, Latino Studies Program, Institute for the Study of Social Issues and Institute for German Cultural Studies, held in cooperation with the Partnership for a New American Economy and the National Immigration Forum.