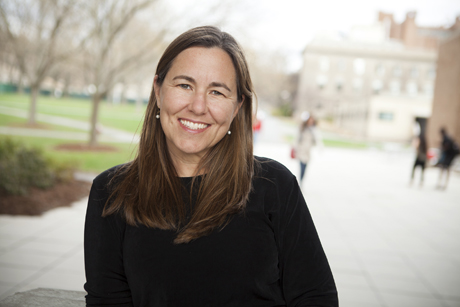 This spring, she finished a long-overdue project she had put on hold during that time: completing her Cornell master’s degree.

In the spring of 1988 Leonard had nearly finished the requirements for her two-year Master of Regional Planning degree. After three semesters of classes she jumped at the chance to spend her final semester in Washington, D.C., doing an internship for credit with the National Wildlife Federation.

Then she was offered a job at the environmental organization Greenpeace – “which was like a dream come true,” she said. “I had done everything except two papers for classes and a thesis. So I thought, ‘I’ll do that; how hard is that?’”

But she quickly got immersed in her work at Greenpeace, at the time in the midst of a campaign to ban international waste dumping. She agreed to travel for Greenpeace International, tracking garbage and hazardous waste sent from developed to less developed countries, to find out where it actually went.

“I was sneaking into the factories where it was being disposed, interviewing the workers, taking hair samples and soil samples to prove the environmental health harm,” she said. 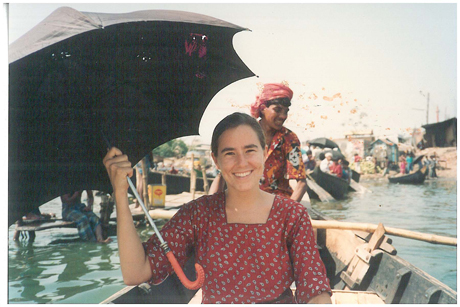 Annie Leonard/Provided
Leonard takes a river taxi in 1993 in Dhaka, Bangladesh, where she worked with local organizations on waste issues.

The efforts by Greenpeace and others resulted in the Basel Convention, an international treaty enacted in 1992 that was designed to prevent transfer of hazardous waste from developed to less developed countries. Leonard ultimately worked for Greenpeace International for a decade.

Leonard continued working with global environmental groups on incinerator alternatives, sustainable production and rethinking the way we make, use and throw away items daily. But it was her animated 20-minute film, “The Story of Stuff,” that brought her the most attention.

The film has been viewed more than 20 million times online, translated into more than 100 languages and used in thousands of schools, churches and by environmental groups. Narrated by Leonard, the film shows how products designed to be regularly replaced fuel a disposable consumer culture of perceived obsolescence that leaves people unsatisfied and ensures that a steady stream of trash and its byproducts will pose ongoing, worsening global challenges. The video also led to The Story of Stuff Project, additional films, a New York Times best-selling book and a thriving online community of people moved to action.

Leonard’s nearly completed degree still hung over her, however.

“I kept thinking, who cares about the initials after my name. I was uninspired to finish [the degree] when my other option was stopping loads of hazardous waste from being dumped on villages in Bangladesh,” she said.

During a brief sabbatical from Greenpeace, Leonard had even finished a draft of her thesis and turned it in, but disagreements with her advisers’ subsequent comments remained. “I just couldn’t get inspired, so I went back to work,” she said. 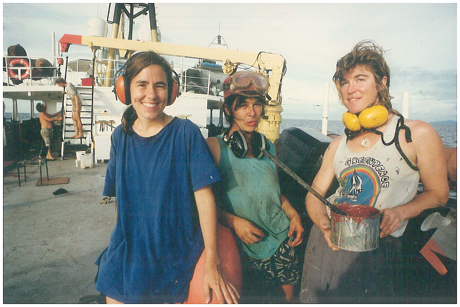 Annie Leonard/Provided
Annie Leonard, left, aboard a Greenpeace ship sailing from Malaysia to Indonesia and the Philippines in 1994. The trip was to raise awareness about and to protest waste dumping in southeast Asia.

Leonard decided to finish her degree for two reasons – the first was as a surprise for her mother’s 80th birthday this July. “My mom is a huge believer in education and was one of the first people in her family to go to college,” Leonard said. “She has three children, all three of us went to great colleges, and they all have advanced degrees except me. She stopped nagging me about it a decade ago, but I knew that she still cared about it.”

The other reason, Leonard said, is to address a vulnerability. She is a controversial figure to some, and has been the target of attacks by right-wing commentators. There is inaccurate information online about her; even her Wikipedia page has erroneously reported that she has a graduate degree from Cornell. “So if any [critics] had wanted to see what my graduate degree was in, and found out that it was never completed, they would have had a field day with that,” she said. “And to say ‘I never said I finished it’ is a lame defense.”

Two members of Leonard’s graduate committee were still at Cornell and welcomed her back. Barbara Knuth, in 1988 an assistant professor of natural resources, is now vice provost and dean of the Graduate School; Dick Booth is professor of city and regional planning in the College of Architecture, Art and Planning.

“Annie’s career has demonstrated her great ability to make a difference in how human society interacts with the natural environment that sustains us, and her great passion and persistence in doing so,” Booth said. “I expect she will continue to make significant contributions to the larger society and act as a role model for many.”

Leonard had hoped she would just have to finish up the thesis she had previously started and complete two papers from classes she took with Booth.

Booth, however, told her that she would have to retake the classes. “He said that if he let me hand in the papers now, it would make a mockery of anyone who finished [papers] on time,” Leonard said. 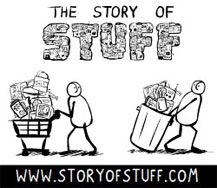 www.storyofstuff.org
The original "Story of Stuff" viral video has been viewed more than 30 million times and sparked a website, a New York Times best-selling book and an online community.

She took her public lands law class online through Vermont Law School, and the other course, Governance of Global Supply Chains, at the University of California, Berkeley, near her home.

“The truth is, I loved it,” she said of being in a college classroom again. “I’m sure the other students thought I was such a geek because here I am, this beginning-to-gray 48-year-old in the class, so eager, on time, every day, saying, ‘Didn’t you guys love the readings? So interesting!’ I’m sure they thought I was a nut. But then, hilariously, ‘The Story of Stuff” was actually on the syllabus. So it didn’t take long for them to figure out who I was.”

“I admire Annie’s perseverance in achieving her graduate degree after 25 years and having already attained unquestionable professional and personal success,” Knuth said. “She is as idealistic and energetic as when I first met her in the 1980s. Annie inspires me!”

Instead of having her finish work on the old thesis, Booth and Knuth encouraged Leonard to adapt two documents she wrote for work into a new research paper. She defended it during a visit to campus in April, and hosted a screening and discussion of “The Story of Stuff” in Call Auditorium.

She also picked up a “Cornell Alumni” mug, which she will give to her mom as a gift this July – along with her diploma.