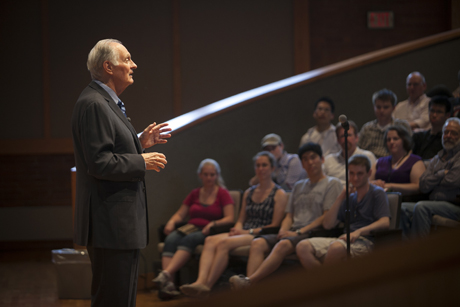 Jason Koski/University Photography
Actor, director and writer Alan Alda talks about the importance of effective science communication to a packed Schwartz Auditorium, May 22.

Blind dates are notoriously dangerous situations because people do not know who they are talking to – and for similar reasons, said actor, director and writer Alan Alda in his May 22 lecture on campus, a lot of people are also leery of science.

Speaking to a sold-out Schwartz Auditorium in Rockefeller Hall, Alda brought his experience as an actor in the TV classic “M*A*S*H,” as the host of the PBS series “Scientific American Frontiers,” and as a founding member of the Center for Communicating Science at Stony Brook University to initiate a dialogue on communication’s vital role in science.

In a Chilean emergency room, Alda had his first true encounter with the importance of effective science communication. “[The doctor] came in and said, ‘Here’s what’s happening. Some of your intestine has gone bad, and we need to cut out the bad part and sew the two good ends together.’ ‘So, you’re going to do an end-to-end anastamosis?’” Alda asked. “I did many of them on M*A*S*H … [but] it was still good to hear [the science] in the most basic way.”

Increasing the efficacy of science communication does not mean giving the public a “dumbed down” version of the science, Alda said. He cites the need for a common lingo. “Scientists are dealing with the poetry of nature; it is the beauty of the world ... I want [the public] to get the real story, but I [also] want them to understand it.”

For professors gearing up for massive online open courses in coming semesters, Alda offered words of encouragement from his career as an award-winning actor used to connecting with an audience through television.

Alda’s lecture and accompanying workshops for Cornell scientists (May 22-24) were funded with support from the Kavli Foundation, the Cornell Center for Materials Research and the Energy Materials Center at Cornell.