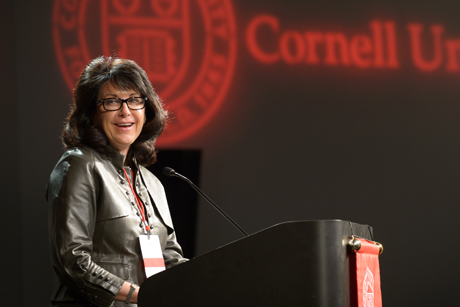 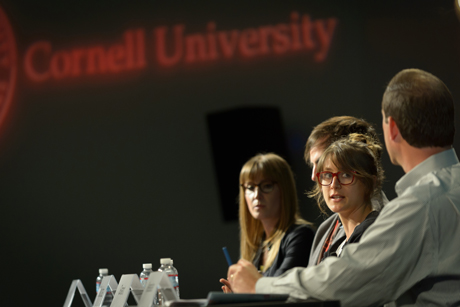 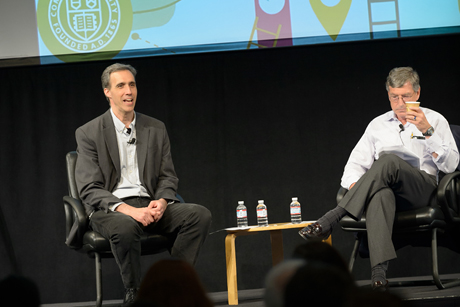 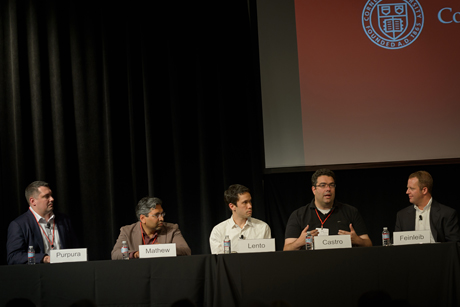 Swisher and about 15 others addressed 470 Cornell alumni, parents and friends April 30 at “CSV 13: A New Wave of Innovation,” held at the Computer History Museum. Talks ranged from the future of “big data” and the new “it” material graphene to discussions on the sharing economy and collective consumption.

“Mobile is the future of everything in Silicon Valley – the desktop computer is almost completely over," Swisher said.

For example, the fact that 29 percent of U.S. adults own a tablet or eReader device today, up from 2 percent three years ago is “tablicious.” We’re also on the brink of the “Internet of things,” such as cars that talk and washing machines and other appliances that can be turned on from anywhere. In the SoLoMo revolution under way, handheld devices are becoming the “remote controls” of our lives, she said. Other trends include the data flood drowning us in information; geo-location technology pinpointing our every move; and a ubiquitous, “promiscuous” Internet that Swisher defines as constantly on, constantly sharing, constantly updating. In summing up, she wondered what this always-on, state-of-partial-attention culture will ultimately mean for society.

At the panel on big data, moderated by Dave Feinleib ’96, founder of BigDataLandscape.com and Speechpad, panelists argued that the hype around big data is largely coming to fruition with real value being created. Big data is a collection of data sets so large and complex that it becomes difficult to process using traditional data processing applications. Panelists discussed how big data’s volume, variety and velocity transform how products and services are marketed, and how consumers and businesses interact.

Big data is a whole new way of making better data-driven decisions, said panelist George Mathew ’95, president and COO of Alteryx. He said to “beware of geeks with algorithms,” but believes in the power of partnered human and machine decision-making. Thomas Lento ’00, Ph.D. ’10, data scientist at Facebook, said that as a data-driven organization, Facebook needs the ability to extract the right data to develop new products and services for its 1 billion users.

Paul McEuen, the Goldwin Smith Professor of Physics, enthusiastically discussed the one-atom-thick graphene – the thinnest material in the world – with potential applications in flexible electronics, rust-proof metal coatings, medical sensors and even as a potential replacement for silicon in semiconductors. He said that the next computing challenge is the miniaturization of machines or machine nanotech, what he calls “hacking life at the nanoscale level.”

At the panel on collective consumption, author, writer and investor Andy Kessler ’80 led a lively discussion on the sharing economy where people rent beds, cars, boats and other assets. Pete Ballotta ’00, director of business operations at Couchsurfing, said “couchsurfers” willingly share their lives with the people they encounter, foster cultural exchange and mutual respect. The company has a global network of 6 million travelers in more than 100,000 cities. Amy Fox of Zimride noted the growing market for on-demand transportation services.

The event closed with a conversation on Cornell NYC Tech with Dean and Vice Provost Dan Huttenlocher and Ken Goldman ’71, CFO of Yahoo!. In discussing the need and excitement around Cornell Tech, Goldman said: “There is a land grab for computer science professionals going on,” with Huttenlocher agreeing that “the discipline is critical for so many industries today.”

CVS is a Cornell University affinity group of which this annual conference, in its 13th year, is the signature event.

Nancy Tomkins ’77 is principal at Words By Design in Menlo Park, Calif.