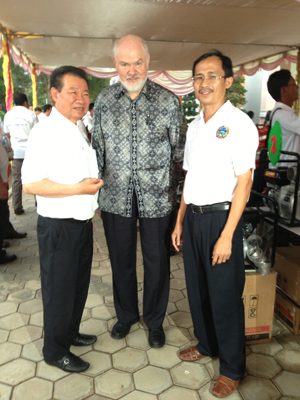 Provided
From left, Chan Sarun, Cambodia minister of agriculture, forestry and fisheries; Professor Norman Uphoff; and Y.S. Koma, president of the Cambodian Center for Studies and Development in Agriculture, who introduced SRI into Cambodia in 2000, pose for a photo April 5.

Norman Uphoff, Cornell professor of government and international agriculture, spoke on what has been learned about the System of Rice Intensification (SRI) around the world April 5 at the closing session of Cambodia's fourth annual national farmers’ conference at the Royal Agricultural University in Phnom Penh. The session was presided over by Cambodia's minister of agriculture, forestry and fisheries.

In his remarks at the conference, the minister reported that use of SRI methods in Cambodia has expanded from small trials done by 28 farmers in 2000 to more than 200,000 farmers. Yields are 50 to 100 percent higher for paddies using SRI, and those yields are achieved with lower production costs. As a result, he said, farmer incomes from rice production can be doubled or more with SRI.

Cambodian institutions learned about SRI methods from information provided by the Cornell International Institute for Food, Agriculture and Development (CIIFAD) when Uphoff was serving as CIIFAD director, between 1990 and 2005. CIIFAD now hosts the SRI International Network and Resources Center, for which Uphoff serves as senior adviser.

In his remarks, Uphoff underscored a range of SRI benefits for farmers beyond achieving higher yields with lower cost, including crop resistance to pests and diseases and greater toleration of climatic stresses such as drought and storms. He also noted that SRI practices are being adapted for other crops, including wheat, sugarcane, finger millet and various legumes. Much of his talk elaborated on the contributions that beneficial soil organisms can make to crop performance.