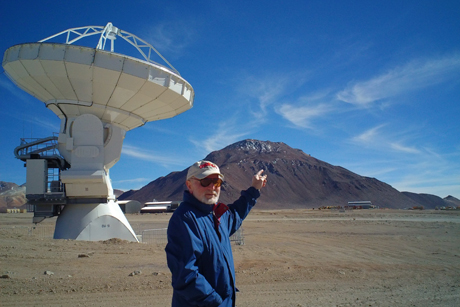 Martha Haynes
CCAT project director Riccardo Giovanelli at the ALMA site, pointing to the CCAT site on the top of Cerro Chajnantor.

Cornell marked a significant milestone recently when university representatives traveled to the high, arid desert of Chile for the first board meeting of the institutions planning to build the world’s largest submillimeter wavelength telescope.

Cornell is leading an international collaboration to build the Cerro Chajnantor Atacama Telescope (CCAT). Its wide-angle capability will enable deep surveys covering large areas throughout the universe where galaxies, stars and planets are forming.

The board meeting included a CCAT workshop held at the Universidad de Chile in Santiago, with 30 Chilean scientists and representatives from Chile’s national science agency. The meeting demonstrated a new level of maturity and progress in solidifying the project, said professor of astronomy Martha Haynes. 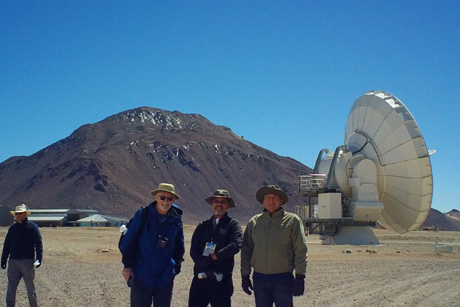 Martha Haynes
At center, from left: Peter Lepage, dean of the College of Arts and Sciences; Ira Wasserman, professor of astronomy and physics; and Jeff Zivick, CCAT project manager, at the ALMA array. The CCAT antenna will be located on the mountain behind them. 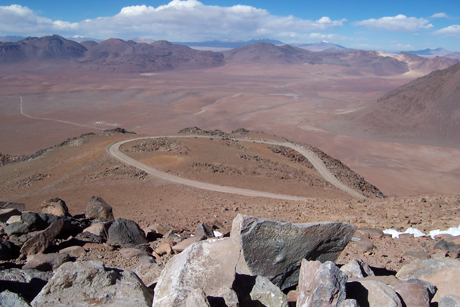 Tim Jenness
The future CCAT site in the Andes Mountains in northern Chile, at about 18,000 feet elevation. 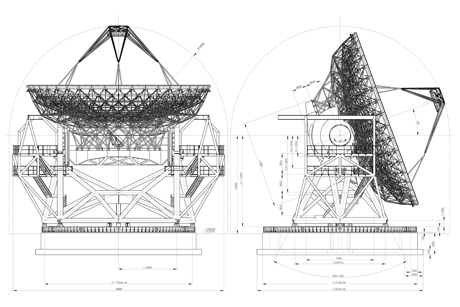 A drawing of the CCAT telescope.

“There is no way this distinguished group of astronomers and science administrators would take themselves on this expensive and exhausting trip if they were not very serious about the importance of this project to their own institutions,” said Haynes.

Among those traveling with Haynes to Chile March 19-22 were Cornell astronomy professors Riccardo Giovanelli (CCAT project director), Gordon Stacey and Ira Wasserman; project manager Jeff Zivick; and Peter Lepage, the Harold Tanner Dean of the College of Arts and Sciences.

Cornell’s participation in CCAT is largely made possible by the generosity of Fred Young ’64, Lepage said. “We at Cornell are thrilled to be part of this exciting scientific endeavor. Fred’s support has been instrumental in Cornell’s ability to assume the leadership position for the project,” he said.

CCAT is a collaboration of Cornell, the California Institute of Technology, the University of Colorado, the Universities of Bonn and Cologne in Germany, a consortium of eight universities in Canada, and Associated Universities Inc., a nonprofit that manages the construction and operation of large scientific facilities.

Cornell leads the collaboration and hosts the project office on the Ithaca campus. CCAT’s objectives include research on the formation and evolution of galaxies and the growth of chemical complexity throughout the history of the universe; the buildup of clusters of galaxies; the processes of star and planet formation in the Milky Way galaxy; and Kuiper Belt objects in the outer reaches of the solar system.

In addition to the board meeting in Santiago, the Cornellians visited the site where CCAT will be built in the Atacama Desert in the Andes Mountains of northern Chile. It is one of the few places on Earth where the water vapor in the Earth’s atmosphere will not absorb the millimeter and submillimeter wavelength cosmic radiation that CCAT will see.

Because of the site’s extremely remote location, high elevation and aridness, visitors must follow a strict protocol to avoid health problems. They spent one night in San Pedro, at an altitude of about 8,500 feet, to acclimate. The next day, at 10,000 feet, paramedics checked blood pressure and explained the use of supplemental oxygen. They then proceeded to a 17,000-foot elevation, which is the closest visitors can come to where CCAT will be built.

They also toured the nearby Atacama Large Millimeter/submillimeter Array (ALMA), a $1.6 billion array of radio dish antennas constructed by a multi-country partnership. ALMA consists of 54 12-meter and 12 7-meter diameter antennas spread on a plateau at an elevation of 16,500 feet. In contrast, CCAT will be a single, high-precision 25-meter antenna above 18,000 feet.

CCAT will work cooperatively with ALMA, with CCAT as the “wide angle” lens to complement ALMA’s “zoom lens” capability. CCAT will enable astronomers to discover where galaxies, stars and planets are forming; ALMA will take close-up images of what those objects look like and what they are made of.

According to Giovanelli, CCAT goals for this year include developing a final plan for the telescope’s site, building a road to the spot and developing infrastructure so telescope construction can begin in about a year. The facility should be completed in 2017, he said.

Linda B. Glaser is the staff writer for the College of Arts and Sciences.