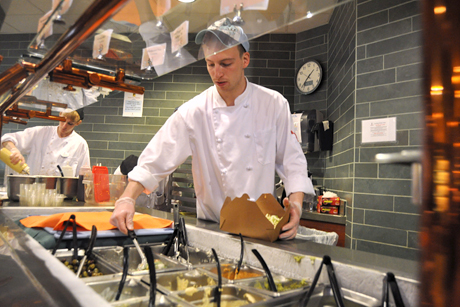 When Martin Andonov ’13 approached Steven Miller, senior executive chef with Cornell Dining, in January to test his new restaurant concept, Miller says the timing could not have been more fortuitous.

“I had just begun developing an idea for a Mediterranean food station at Trillium,” said Miller. “Martin had put together a business plan for a Mediterranean restaurant chain and was looking for a real-world opportunity to test the viability of the concept.”

In April, Andonov won first place, out of 30 applicants, for his “Agora Hellenic Grill” food-service concept in the Cornell Hospitality Business Plan Competition at the School of Hotel Administration.

The award came with a $15,000 prize, which Andonov plans to use to help launch his business in London after he graduates. Andonov envisions a “quick-service restaurant chain,” he said, “featuring high-quality Mediterranean food made fresh daily, served in a highly customized way.”

The Cornell Dining trial was a “proof of concept” for his idea as a first step to attract investors.

“Martin came to us with some great recipes and ideas,” said Miller. He advised Andonov to focus on high-quality, freshly baked bread – “the bread has to be fantastic,” he said – along with freshly ground spices and authentic flavors from the Mediterranean regions. Andonov worked closely with chefs at Trillium to experiment with and refine his recipes.

For one week in April, Andonov’s Mediterranean menu was showcased at Trillium, Cornell’s busiest lunch eatery, with a sample platter featuring grilled chicken, marinated steak or zucchini fritter, plus side dishes and condiments, for $7.99.  Customers were surveyed daily, leading to slight adjustments to the recipes and presentation throughout the week.

“We saw the sales numbers (for the Mediterranean station) increase by 20 percent each day,” Chef Jacob Kuehn reported. The number of customers served per day at the station more than doubled between Monday and Friday, and by the end of the week, the station had the highest sales numbers of any at Trillium.

“The chefs, by their standards, said it was an extremely successful product launch,” said Andonov, who also worked with Cornell Dining to measure the sales numbers against cost of goods, labor, equipment and training.

By agreement, Andonov now has a final menu and concrete proof of concept to present to investors for his Agora Hellenic Grill business launch. And Cornell Dining will be serving the majority of the recipes developed through the collaboration at a new Mediterranean food station due to open, under a different name, at Trillium in the fall.

“As a Hotel School faculty member, I really appreciate that Cornell Dining was so interested in collaborating with the academic side of the university,” said Andonov’s adviser Neil Tarallo. “It reinforced that we’re all here for the same reason – to educate people.”

“I learned a tremendous amount from the chefs,” said Andonov. “They had a great impact on the menu and the overall concept. I feel like I could call any one of them for advice at any time, moving forward.”