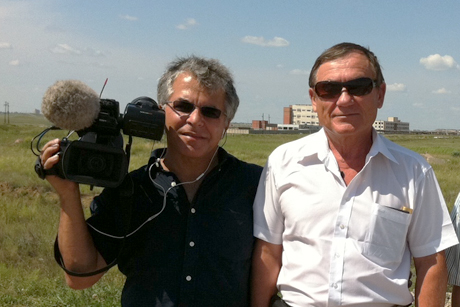 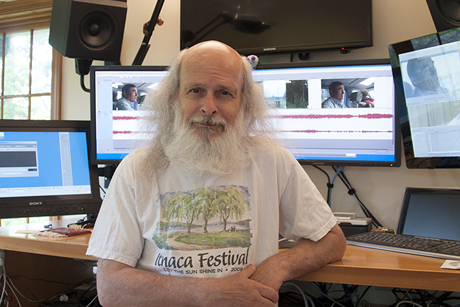 The purpose of a secret Soviet facility was to produce tons of anthrax bacteria to kill Americans, according to a U.S. government official.

The facility was capable of producing 300 metric tons of anthrax in 10 months – more capacity than the entire Iraqi biological weapons program. “The scale is just chilling,” Andrew Weber ’82 said.

Weber was part of a group of U.S. experts the Kazakhstan government called in after the fall of the Soviet Union to dismantle Soviets bioweapons-manufacturing facilities the Soviets left behind. Weber, now assistant secretary of defense for nuclear, chemical and biological defense programs, is a featured expert in “The Anthrax Diaries,” a 26-minute pilot documentary film about the Soviet bioweapons program. Also featured is the man who ran the anthrax factory, Gennadiy Lepeshkin.

The film is by Slava Paperno, director of Cornell’s Russian Language Program in the Department of Comparative Literature; Kathleen Vogel, associate professor in the Department of Science and Technology Studies and the Reppy Institute for Peace and Conflict Studies; and bioweapons expert Sonia Ben Ouagrham-Gormley. Award-winning filmmaker Slawomir Grunberg is director of photography.

Making the film has not been without risk. Three months after “The Anthrax Diaries” was posted online, Lepeshkin was named a traitor in an anti-American video posted by a state-run TV studio in Russia.

“This was really a return to the bad old Stalin days,” said Paperno. “We remain concerned for Lepeshkin’s future.”

The filmmakers’ goal is to produce a PBS-style documentary and accompanying educational website that will inform the broader public on the ethical, moral, social and security issues of biological weapons, including what happens when weapons experts lose their jobs.

“The Anthrax Diaries” is part of a decades-long Russian Language Program tradition of producing documentaries for language and culture studies. The documentaries are designed to provoke strong intellectual and emotional reactions. According to Paperno, the theme of biological weapons, with its broad range of ethical, political and historical situations, seemed perfect to stimulate discussion.

“Language teaching is inseparable from teaching about culture,” noted Paperno, “and students learn the language best when they’re excited about the issues being discussed.”

The filmmakers are building a website that includes more than 40 hours of interview and location footage, articles, photos and personal stories.

“This project has many different elements that serve the educational mission of the university, and it also helps inform the larger public,” said Vogel, who has been researching the proliferation of former Soviet bioweapons pathogens and personnel since she was a postdoctoral associate at Cornell. She’s given talks at the Cornell Center for Teaching Excellence on how she and Paperno have used the project in their classes.

Vogel and Paperno have applied for funding to continue their examination of the moral dimensions of the weapons scientists.

Lepeshkin, for example, grew up on a military base. He objected when they told him to close the anthrax facility and when the Communist Party folded. “Gorbachev said to turn in your card but I didn’t. In my heart I’m still a Communist,” Lepeshkin said.

Paperno, a St. Petersburg native, comes from a dissident family. “Lepeshkin was my first real close contact with the kind of ideal Soviet person that the Soviet propaganda machine was trying to create,” said Paperno. “It’s been an eye opener for me.”