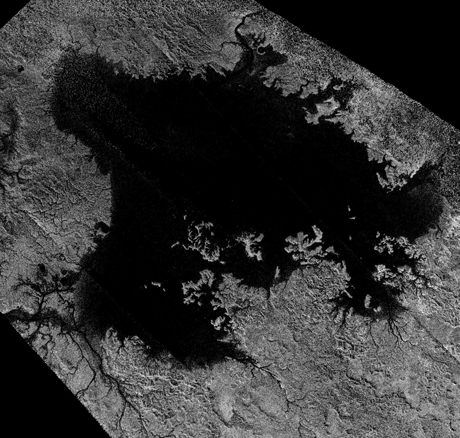 Provided
Ligeia Mare, one of the northern seas on Titan. Over Memorial Day weekend, Cassini will look at this lake with an altimeter in an attempt to detect waves caused by wind. 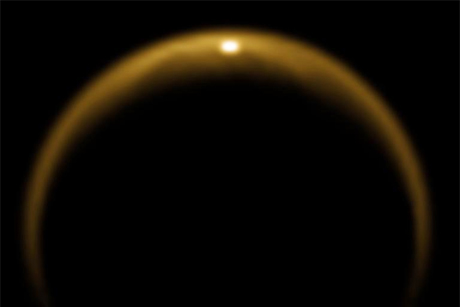 Provided
Sunlight reflects off Titan, Saturn's largest moon. The bright spot at the top is a mirror-like reflection off of Jingpo Lacus, a lake similar in size to the Earth's Lake Onega in Sweden.

Saturn’s moon Titan might be in for some surfing weather as it heads into its spring and summer, if a new model is correct. Two Cornell astronomers and their colleagues think that as the seasons change in Titan’s northern hemisphere, we might see – for the first time – waves of up to a foot high ripple across the moon’s seas of liquid methane and ethane.

Given the wind-sculpted, continent-sized dunes NASA’s Cassini spacecraft has seen near Titan’s equator, scientists have been intrigued as to why they hadn’t yet seen wind-driven waves on its hydrocarbon lakes and seas near the poles. On Earth, for example, it is rare to see a body of water without at least some form of wind-driven ripples or waves on its surface. So a team led by Alex Hayes, Cornell professor of astronomy and a member of Cassini’s radar team, set out to look for how much wind would be required to generate waves on Titan. Their new model, which is online in the journal Icarus and will appear in the July issue, improves upon previous ones by simultaneously accounting for Titan’s gravity, the viscosity and surface tension of the hydrocarbon liquid in the lakes and the air-to-liquid density ratio.

“We now know that the wind speeds predicted during the times Cassini has observed Titan have been below the threshold necessary to generate waves,” Hayes said. “What is exciting, however, is that the wind speeds predicted during northern spring and summer are close to those necessary to generate wind waves in liquid ethane and/or methane. It may soon be possible to catch a wave in one of the solar system’s most exotic locations.”

The presence or absence of wind waves during Cassini’s solstice mission also may tell us about the composition of Titan’s lakes and seas and help discern which of the climate models that predicted the winds is most accurate, he added.

Titan’s seasons take about seven Earth years to change. Titan’s north polar region, which is bejeweled with sprawling hydrocarbon seas and lakes, was dark when Cassini first arrived at the Saturn system in 2004. But sunlight began to creep up into Titan’s northern pole following equinox, when the sun crossed the equatorial plane, in August 2009. By 2017, the end of Cassini’s mission, Titan will be approaching northern summer solstice, the peak of Saturn’s (and consequently Titan’s) summer.

The new model found that winds of 1 to 2 mph are needed to generate waves on Titan lakes, a speed that is not predicted to occur during the currently calm period surrounding equinox. For comparison, wind speeds of 4 to 5 mph are needed to generate waves in water on Earth. But, as Titan’s northern hemisphere approaches spring and summer, models predict that the winds may increase to 2 mph or faster. Depending on the composition of the lakes, winds of 2 mph could be enough to produce waves one-half foot high.

The model helps mission team members plan when and where to look for waves and unusual atmospheric disturbances as Titan summer approaches.

The Cassini solstice mission may represent only the beginning of Titan wave studies, Hayes said. “Future mission concepts include orbiters better suited to repeat observation of the sea surface, airplanes or floating capsules that can observe waves in situ,” he said.

Jonathan Lunine, director of Cornell’s Center for Radiophysics and Space Research and the David C. Duncan Professor in the Physical Sciences, is a co-author on the paper, “Wind-Driven Capillary-Gravity Waves on Titan: Hard to Detect or Non-Existent?”

The Cassini-Huygens mission is a cooperative project of NASA, the European Space Agency and the Italian Space Agency. The Jet Propulsion Laboratory in Pasadena, Calif., manages the mission for NASA’s Science Mission Directorate in Washington, D.C.