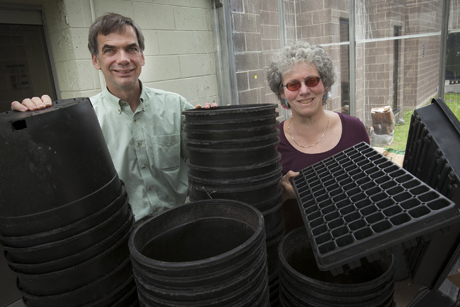 On today’s farms, plastic is as ubiquitous as dirt. From plastic film that wraps silage to leftover pesticide containers to the thin trays that hold seedlings, plastic plays an important role. But in the dark world of agricultural plastic afterlife, the primary destination has been either burning or landfill.

Through RAPP, farmers throughout New York can bale the plastic and distribute it to new post-recycling markets. RAPP has developed and disseminated Best Management Guidelines for farmers on how to prepare their plastics for these recycling markets. Basically, farmers need to keep the plastic as clean and dry as possible, and free of mud, grit and gravel.

Since May 2011, when a New York State Department of Environmental Conservation contract enabled RAPP to hire field staff, the program has collected more than 1 million pounds of agricultural plastics.

In the past, many farmers paid haulers to cart their agricultural plastic to landfills, paying tipping fees of $70 per ton. Recycling their plastics  is like cash in the farmer’s pocket.

RAPP collections have reached about 5 percent of the agricultural plastics used in the state and is starting to approach the 8 percent national recycling rate for all plastics, including water bottles and milk jugs from curbside recycling programs.

Dominating the farm world are low-density polyethylene, high-density polyethylene, polypropylene and polystyrene. Lightweight, unbreakable plastics have become pervasive on farms, since in many cases they are safer, less expensive and environmentally more benign than the ceramic, glass, concrete and metal products previously used. One of the most visible uses: those huge, so-called field “marshmallows” of silage, so that the feed doesn’t degrade and spoil. Vegetable growers use plastic mulch to suppress weeds and warm soil.

As these groups work together to improve agricultural plastic recycling, the industry is becoming more economically feasible. A good baler can take 1,000 pounds of agricultural film plastic and turn it into a four-foot cube – ready to serve another commercial use, such as, perhaps, roof drainage tiles, asphalt paving, highway and parking bumpers – and now new building materials.

In addition to working on farms and in agricultural communities, RAPP is part of a multinational network talking with plastic product manufacturers, encouraging them to consider the recyclability of the plastics they produce.

“Recycling is more difficult with certain types of plastic resin and with mixes of different resins,“ Levitan said. “But we are making exciting headway in giving film and rigid plastics another life after the farm.”