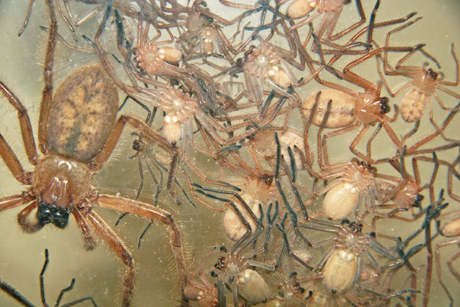 Linda Rayor
An adult female Delena cancerides with offspring from a single clutch. 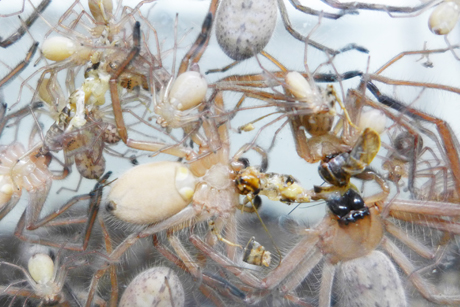 Linda Rayor
A family of Delena cancerides with siblings of all ages sharing crickets.

The behavior of social spiders may settle debates over the benefits of older siblings. Cornell researchers studying Australian social huntsman spiders have discovered that younger siblings thrive when raised in nests with older siblings. Bigger brothers and sisters capture bigger, juicier prey, which they – at least occasionally – share with their younger siblings.

Through field data and laboratory experiments, the researchers showed that younger siblings weighed substantially more when they shared the prey of their elder brethren. Since smaller spiders eat relatively little, there is little to no cost to the older siblings. And healthier family groups help carry on that family’s genes.

The study, published online April 18 in the journal Animal Behavior, describes how prey sharing can directly benefit spiders living as a group.

Australian social huntsman spiders (Delena cancerides) are fairly common throughout the southern half of Australia, living as family groups with a single mother and multiple “clutches” of her offspring in “retreats” under the loose bark of dead trees.

“One of the most unusual things about Delena colonies is that there are siblings of a huge range of ages and sizes, in the colonies together at the same time,” said Linda Rayor, a Cornell entomologist and co-author of the study. “It’s common to have tiny spiderlings mingling with older siblings that are almost a year old. So what is totally cool about Delena is that mix of siblings of different ages and how they interact around prey brought into their retreat.”

“If you are small, the number of things you can capture may be quite limited,” said Eric Yip, Ph.D. ’12, the paper’s lead author who conducted the research while a graduate student in Rayor’s lab.

“The benefit of prey sharing is it gives small spiders more opportunities to find food, without which they could starve,” said Yip, a postdoctoral researcher at the Ben-Gurion University of the Negev in Israel.

In the field, Yip and Rayor collected, measured and weighed more than 2,000 spiders from 90 colonies. They found that young spiders (fourth and fifth instars, or spiders in early stages of development) in retreats with older siblings were 17 percent and 7 percent heavier, respectively, than their counterparts without older siblings. Sharing prey with younger spiders had no measurable effect on the older ones.

Though older siblings generally hunt and eat nocturnally, alone and away from retreats, Yip and Rayor observed prey leftovers at the bottoms of the retreats, likely due to insects that wandered near the nest or that older siblings dragged back home at dawn, Rayor said.

Worldwide, out of more than 43,000 spider species, only about 80 exhibit social behaviors, with offspring living at least part of their lives with mothers or in large social groups. Of the social spiders, only a few species do not live in prey-capture webs, including some Australian social crab spiders (Diaea species) and Delena cancerides.

“The concessions that an essentially solitary hunter like a spider makes in order to live in groups I think is really interesting,” Rayor said. “What we’re seeing is these huntsman spiders, by living in groups, end up having many benefits in many ways.”

The study was funded by the National Science Foundation, Australian-American Fulbright Commission and the President’s Council of Cornell Women.