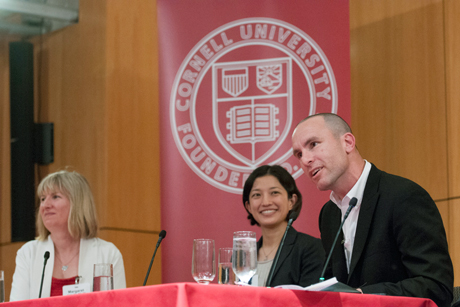 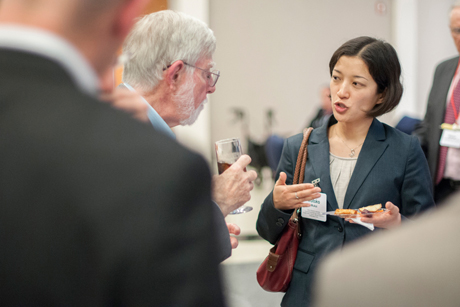 The chemical industry and government regulators should do more to ensure that chemicals found in many consumer products are safe, said three faculty fellows in Cornell’s Atkinson Center for a Sustainable Future at a Washington, D.C., panel discussion June 18.

Earlier in the day, the Cornell scientists met with congressional staff to offer research-based information relevant to the Safe Chemicals Act of 2013, a bill introduced in April by the late Sen. Frank Lautenberg (D-N.J.) and Sen. David Vitter (R-La.) and co-sponsored by Sen. Kirsten Gillibrand (D-N.Y.).

“Unlike bygone days, we’re not often confronted with acute levels of toxins that are killing people outright, creating obvious birth defects, or causing high rates of cancer,” said Anthony Hay, associate professor of microbiology and director of the Institute for Comparative and Environmental Toxicology in the College of Agriculture and Life Sciences. “The effects that we’re seeing today, that toxicologists are concerned with, are much more subtle.”

The Safe Chemicals Act would for the first time update the 1976 Toxic Substances Control Act, or TSCA, and give the Environmental Protection Agency the greater authority to collect safety data about chemicals before they reach the market.  Currently, the EPA presumes a chemical is safe unless there is evidence to the contrary.

Of the nearly 85,000 chemicals registered in the United States, 200 have been examined and only five have been banned. Yet the Centers for Disease Control has identified 212 industrial chemicals in Americans’ bodies. Six are known carcinogens, and dozens more are known to cause disease and birth defects.

These chemicals are found in cleansers, detergents, furniture, food packaging, electronics, non-stick pans and children’s products. Pregnant women and children are especially at risk from exposure to toxic chemicals.

“TSCA should be able to regulate these compounds before they come to market, and industry should be a little more responsible for which compounds are used,” said Mukai.

Earlier in the day, Mukai said she tried to impress on policymakers that “it’s very important to know that even if you regulate one compound or set a safety limit for one compound, if you have 10 different compounds with similar effects and even if all of them are below the safety levels, added together [they] can create a toxicological effect.”

One day consumers may be able to test for toxins themselves. Frey designs fibers hundreds of times finer than human hair to capture chemicals, bacteria and viruses. She said industry has moved away from using many kinds of toxic chemicals to using more naturally occurring materials like enzymes for the same processes.

“… the goal is maybe like a home pregnancy test that really any person with no training can go and get and use and test to find out if they’re subject to a disease or if toxins are present in their water or in their food or in their environment,” Frey said.

Hay stressed that the scientists did not want to generate “chemical phobia,” as chemicals are important to our everyday lives. “Minimizing chemical exposure to everything just isn’t possible,” he said. “So just managing the risks and realizing, ‘OK, who are the sensitive populations who we need to worry about,’ I think that’s the more rational approach.”

Marijo Wright Dowd is a freelance writer in the Washington, D.C., area.