Physics visionary Kenneth G. Wilson, winner of the 1982 Nobel Prize in physics for his research at Cornell, died in Maine June 15 from lymphoma complications. He was 77.

“Ken Wilson was one of a very small number of physicists who changed the way we all think, not just about specific phenomena, but about a vast range of different phenomena,” said Nobelist Steven Weinberg ’54, University of Texas physicist and astronomer.

The Nobel Prize recognized Wilson’s work on phase transitions, such as the transformation of a substance from the liquid to the gaseous state. Wilson was led to this breakthrough from his struggles with mysteries in elementary particle physics and quantum field theory, topics that would appear to have no relationship to phenomena in liquids or gases. The tools Wilson brought to bear in his research were diverse, ranging from abstract mathematics to supercomputing.

Wilson was born June 8, 1936, in Waltham, Mass. He earned his Ph.D. from the California Institute of Technology in 1961, studying under Nobelist Murray Gell-Mann. Subsequently, as a junior fellow at Harvard, while waiting for output from an MIT computer, he proved a mathematical conjecture proposed by theoretical physicist Freeman Dyson. 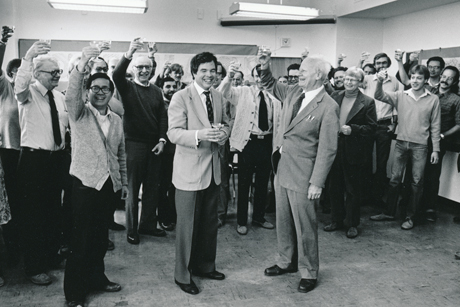 In 1963 Wilson joined the Cornell physics department and was soon given tenure even though he had hardly published. As he later said in his Nobel autobiography, “my very strong desire to work in quantum field theory did not seem likely to lead to quick publications; but I had already found out that I seemed to be able to get jobs even if I didn’t publish anything so I did not worry about publish or perish.”

Wilson’s Nobel Prize-winning research stemmed from work on phase transitions by Michael Fisher and Benjamin Widom at Cornell and Leo Kadanoff at the University of Illinois. Their findings motivated Wilson to ask whether his own work on quantum fields would be amenable to a similar approach, for all of these phenomena involve huge numbers of variables describing a wide range of length scales. In the 1970s, this inspired Wilson to formulate a mathematical scheme called the renormalization group, for which he received the Nobel Prize.

Following this work on phase transitions, Wilson turned again to quantum field theory and quantum chromodynamics (QCD), the newly proposed theory that protons, neutrons and other subatomic particles are composed of smaller particles called quarks. He created a version of QCD on a space-time lattice that made it possible for the first time to analyze the very strong forces that bind quarks together.

“He was decades ahead of his time with respect to computing and networks as well,” said Paul Ginsparg, professor of physics and information science, who was one of Wilson’s advisees when he was a graduate student at Cornell in the 1970s. “After inventing lattice gauge theory in 1974, he found he didn’t have adequate computing power to solve the theory numerically, so he wanted easy ways to use large numbers of parallel processors.”

So Wilson became a pioneer in the field of supercomputing, and was instrumental in the National Science Foundation’s establishment of five national scientific supercomputing centers, one of them at Cornell.

Wilson was widely recognized for other scientific accomplishments, including Israel’s Wolf Prize in Physics in 1980 and an honorary doctorate of science from Harvard University in 1981.

In 1987 Wilson left Cornell for Ohio State University, where he helped found the Physics Education Research Group. At Ohio State, he focused on physics and science education.

Wilson is survived by his wife, Alison A. Brown; his brother, David Wilson, a professor of molecular biology at Cornell; four other siblings; and a stepmother.