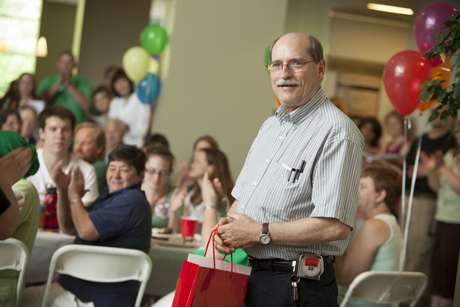 While on duty, first in the U.S. Army and later with the New York Army National Guard, Rayburn Coolbaugh piloted one of the nation’s largest helicopters, a CH47-D Chinook. In his service to Cornell, Coolbaugh has been responsible for millions of dollars of technical and complex laboratory equipment, including installing, calibrating and maintaining more than 25 analytical balances, various types of centrifuges and hundreds of digital and glass thermometers, incubators and ultra-low freezers.

Coolbaugh’s positive attitude and dedication to his work prompted his nomination for the George Peter Award for Dedicated Service, which he received May 30 at a recognition luncheon held at the Animal Health Diagnostic Center (AHDC), where he works as an equipment technician.

Coolbaugh is “a solid performer, totally self-disciplined, has great initiative, and is highly skilled in a number of extremely technical systems,” wrote his supervisor and AHDC business director Kimberly Ramm in her nomination letter. “He can communicate with equipment users, lab managers, faculty members, external vendors and college administrators with ease,” she wrote.

“Ray’s primary strengths lie in his dedicated service, his dependability, and his versatility and in-depth knowledge of instrumentation installation and repairs,” wrote Linda Benson, laboratory manager of the virology section of the AHDC, citing his strong work ethic.

According to Denise Archer, AHDC’s quality assurance manager, his calibrations ensure quality test results, leading to better decisions in the treatment of animals.

At the recognition picnic, Bruce Akey, assistant dean of diagnostic operations in the College of Veterinary Medicine and executive director of the AHDC, recognized AHDC staff who were celebrating a fifth-anniversary year of service, then introduced Tanya Grove, chair of the Employee Assembly, who presented Coolbaugh with the George Peter award.

Grove said that the George Peter Award for Dedicated Service is given to “Cornell staff members who consistently demonstrate a high degree of excellence in the performance of their duties and who prove their willingness to extend themselves to help others and go above and beyond the normal expectations of their job responsibilities.”

Mary Opperman, vice president for human resources and safety services, also congratulated Coolbaugh, saying that she was “very, very proud that the EA chose to give you this award,” and presenting him with an autographed copy of historian Carol Kammen’s “Glorious to View.”

Akey also highlighted Coolbaugh’s oversight of the move from the former AHDC location to the present one, including the re-installation of all equipment.

Coolbaugh, who started working at Cornell in 1985, said that he was “definitely taken by surprise” to receive the George Peter award. “This has been a great career, giving me great people to work with,” he said.

Coolbaugh will retire from Cornell at the end of July. He and his wife plan to stay in Trumansburg, with trips to local and national parks and recreational areas. Coolbaugh also hopes to have more time to build and fly model airplanes and helicopters and to be active as a member of the Ithaca Radio Control Society.