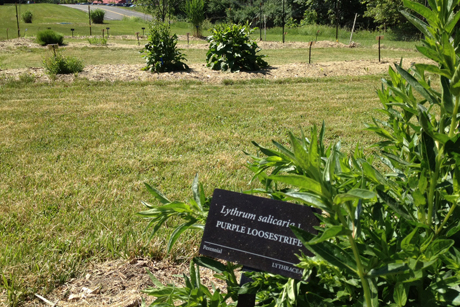 Blaine Friedlander/Cornell Chronicle
With all kinds of shapes, sizes and leaves, about 85 weeds populate the Cornell Weed Garden, a living laboratory for plants farmers and gardeners sometimes love to hate.

If you’re looking for an unusual tourist spot this summer, consider Cornell’s garden of “weedin’.”

The Cornell Weed Garden is a scientific utopia that features 85 of the Northeast’s most tenacious, loathsome and frustrating plants known to farmers and home gardeners, but sometimes surprisingly tasty to naturalists.

“Students appreciate hands-on learning, and the Cornell Weed Garden is experiential,” says Antonio DiTommaso, associate professor of weed ecology and management in crop and soil sciences. “Students in my weed science course are expected to know about 90 weeds including from seeds for the more common species. Rather than just learn in a classroom or from a textbook, they can appreciate and see firsthand the diversity, the shapes, sizes, characteristics – so that one day they can use this knowledge to better manage these troublesome plants.” 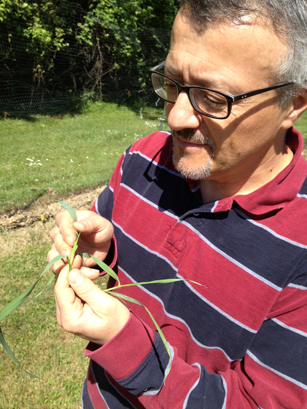 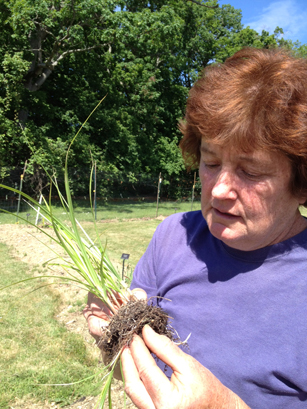 Why learn about weeds? Even with best management practices, farmers and home gardeners spend more than $12.5 billion annually on pesticides. The United States used 1.1 billion pounds of pesticides in 2007 – about one-fifth of the world’s estimated 5.2 billion pounds, according to the EPA. The U.S. agriculture sector consumed about 80 percent of all U.S. pesticides, with herbicides accounting for more than 70 percent of this total.

Donald Viands, associate dean and director of academic programs in the College of Agriculture and Life Sciences, provided a small grant to DiTommaso for the garden startup in 2008. Today, the garden thrives.

It resembles many typical, well-tended home gardens: it’s rife with wild parsnip, poison hemlock, yellow nutsedge, common ragweed and field horsetail. Before the plants were added, formal trenches were dug and lined with 15-gallon plastic pots to prevent the weeds from spreading. Drip irrigation reaches every weed, allowing them to thrive. The garden is divided into plant families with professional labels also denoting scientific names, common names and growth habits.

You don’t have to hate weeds, says DiTommaso. Sometimes, weeds can help restore depleted soils, and some are safe as salad greens, such as common purslane, common lambsquarters and common chickweed.

Many, of course, are not edible, such as poison hemlock, the leafy spurge, which exudes a white sap when branches or leaves are cut, and the highly invasive field horsetail, poisonous for young horses, which is so tenacious, that even the widely used herbicide Round-Up cannot control it.

Other plants, such as johnsongrass, which resembles a tall grass, and the showy but weedy annual morning glory (Ipomoea spp.) are a concern, says DiTommaso, because they may proliferate in the Northeast with climate change.

DiTommaso invites the Cornell community, general public and others to visit the garden and learn to identify and appreciate weeds. As he often says: “Weeds are diverse. You can love them, you can hate them … but sometimes you can eat them.”