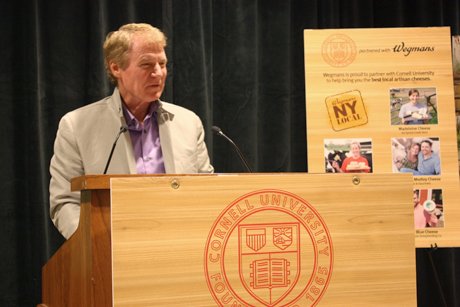 Cornell University is working to put New York on the map for artisan and specialty cheesemaking.

A partnership with Wegmans Food Markets, announced June 26 at the grocer’s Pittsford, N.Y., store, will provide new training opportunities for large- and small-scale cheesemakers, as well as production enhancements that could lead to lower costs, greater efficiencies and new product lines.

The plan is to increase the quality and amount of New York-made cheeses, while also helping cheese businesses to grow by providing a market for their products.

As part of the partnership with the College of Agriculture and Life Sciences (CALS), Wegmans is providing $360,000 in funding for a three-year pilot program at Cornell. It includes hiring an artisan cheese extension associate position in the Department of Food Science who will create a training curriculum to serve entrepreneurs as well as the state’s larger cheese producers.

Through hands-on workshops and coursework, beginners will start with the basics of dairy microbiology and sanitation, while more advanced cheesemakers can train in molding, brining and curing, and quality assurance. 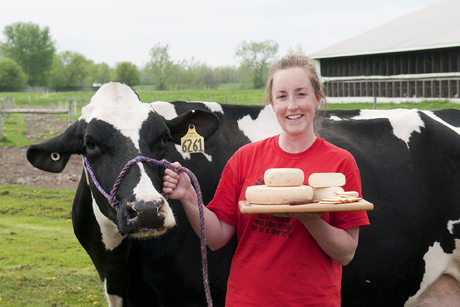 Robyn Wishna
Keeley O’Brien, owner of Keeley’s Cheese Company in King Ferry, N.Y., is one of five artisan cheese makers whose products will be featured in Wegmans Food Markets thanks to a new Cornell program.

“Our goal is to support the next revolution in New York’s dairy industry,” said Kathryn Boor, the Ronald P. Lynch Dean of CALS. “In addition to boosting both large- and small-scale cheesemakers, this partnership will provide increased economic opportunity for dairy farmers and cheese manufacturers and new high-quality products for consumers.”

Early participants in the program include Keeley’s Cheese Co. (King Ferry), Danascara Artisan Cheese (Fonda), Sprout Creek Farm (Poughkeepsie), Goats & Gourmets (Westerlo) and Old Chatham Sheepherding Co. (Old Chatham), each of which debuted products at the event that will be sold immediately at the Pittsford store and later rolled out to other Wegmans locations.

Their relationship with Wegmans will soon become even more linked. Wegmans is building a new affinage, or cheese-aging facility, in Chili, N.Y., and is looking to buy young cheeses from the cheesemakers to reach maturity there, according to Cathy Blodgett Gaffney ’89, Wegmans director of cheese and deli departments.

That would provide a payday earlier in the process, a bonus to cheesemakers like Keeley and Alan O’Brien, of Keeley’s Cheese Co., whose Irish-style washed rind cheese, Across the Pond, wasn’t available in the United States until they started making it in King Ferry.

The O’Briens said they plan to expand from a two-person operation to a five-person enterprise this year because of the deal with Wegmans.

Wegmans CEO Danny Wegman also announced that conversations with Cornell led the retailer to begin sourcing its store-branded cheddar cheese from New York cheesemakers after years of marketing Canadian cheeses. Its mild cheddar is now made in the town of Adams, while its medium cheddar is made by Yancey’s Fancy in Corfu and its intense cheddar hails from New York City’s Flatiron District, where it is made by Beecher’s.

“Our goal has been to sell the very best cheese that we could,” Wegman said. “Today, many of our customers think that means local.”

New York State Agriculture Commissioner Darrel Aubertine lauded the partnership as another boost to the state’s dairy industry and 127 licensed cheesemakers. “Yogurt has been one of the commodities that has certainly taken off in the last year and a half, especially Greek yogurt. But cheese is still the largest manufacturing commodity produced here in New York state,” Aubertine said.