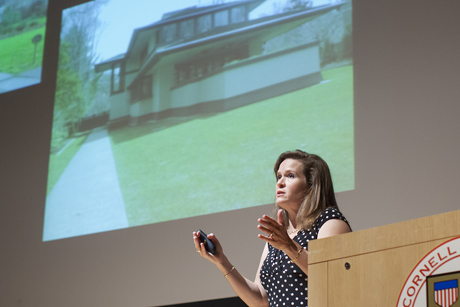 Robert Barker/University Photography
Kim Brown Bixler '91 talks about the experience of growing up in a Rochester home designed by Frank Lloyd Wright in front of a Statler Auditorium audience July 10. 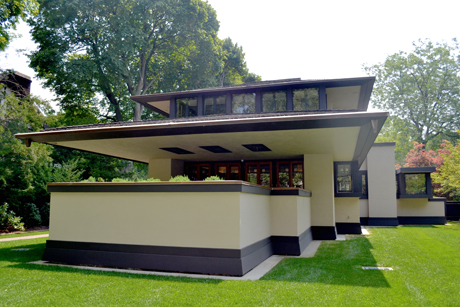 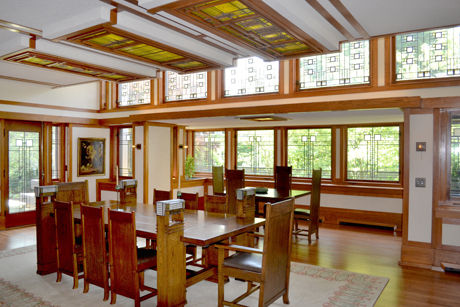 Kim Brown Bixler ’91 entertained a Statler Auditorium crowd July 10 with stories of growing up in the only Frank Lloyd Wright-designed house in Rochester, N.Y.

Bixler mimicked her 8-year-old self giving a tour, clasping her hands together and intoning, “The house was built in 1908 for a widower, Edward E. Boynton, and his 20-year-old daughter, Beulah …” Visitors 30 years ago were impressed when she would announce that “this is a prairie-style house, built to fit the landscape, not to fight the landscape,” though she confessed that her mother had actually written the speech.

Her patter came in handy as a Cornell student, when history professor Fred Somkin asked her unexpectedly to talk about living in the house. Bixler took a breath and delivered her familiar speech.

Bixler’s family lived in the house from 1977-94, and during that time house tours were limited to architecture students, charitable organizations and community groups – and anyone with a really good story, she said. The entire family became experts on the house and Wright, which led to Bixler writing “Growing up in a Frank Lloyd Wright House” (2012), on which her Cornell talk was based. She has given similar talks around the country, and has been a featured guest at other Wright buildings.

Boynton House is approximately 5,500 square feet and contains four bedrooms, three full baths, four half baths and servants’ quarters. The original property included tennis courts, a reflecting pool and extensive gardens, but the first owner sold part of the land to cover business losses and those elements were lost. The current owner did a massive, multi-year rehabilitation, which included restoring a water feature and landscaped gardens. The rehabilitation, and Bixler, are featured in a 2012 PBS documentary, “Frank Lloyd Wright’s Boynton House: The Next Hundred Years.”

Unlike many of the 409 Wright structures still standing, Boynton House has some of the original pieces of furniture Wright designed, including two dining room tables, 12 dining room chairs, a buffet table, a library table and a plant stand. The original ice box, with a door on the outside wall of the house where fresh ice and milk could be delivered, was also still in place – but by the time Bixler’s family moved in, it had been converted to an electrified refrigerator.

Living in a work of art was not without its challenges. Wright, who once described himself in court under oath as “the world’s greatest architect,” was famous for the leakiness of his flat roofs. Bixler explained that if snow wasn’t immediately shoveled off Boynton House’s roof, heat from the windows would melt the snow and the water would seep through the window casings and into the ceiling. She showed photos of one memorable downpour when the entire family had to frantically race to put towels and pans under all the leaks.

Each of the 253 art glass windows, light lenses and doors were designed by Wright, but unfortunately without regard to retaining heat inside. In 1978, the house required more than 3,000 gallons of oil to heat, and it was still freezing. “Put on another sweater” was the family’s winter solution. Bixler described how they would barricade themselves in the library each night with a space heater, huddled in sleeping bags, to drink hot chocolate and watch TV while enjoying a respite of warmth.

The event was sponsored by the School of Continuing Education and Summer Sessions.