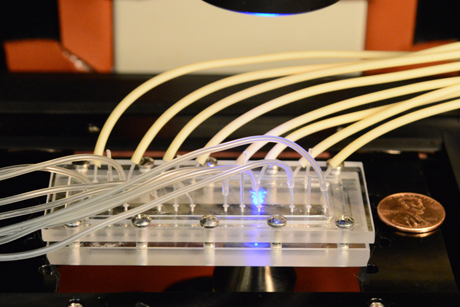 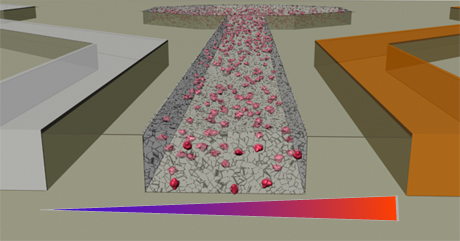 Andrew Darling
A schematic drawing of the microfluidic device. Tumor cell-embedded collagen is seeded in the center channel.

Fully understanding how cancer metastasizes, or moves from one place to another in the body, will save many lives. Cornell bioengineers are examining a critical step in the metastatic process using a microfluidic device that mimics the cancer cell microenvironment.

Publishing online July 15 in PLOS One, a research group led by Mingming Wu, associate professor of biological and environmental engineering, has uncovered insights into how certain chemicals secreted by the body’s immune system affect how breast cancer cells metastasize. Their device is a 3-D recreation of the chemical signaling cascade that can potentially lead to metastasis.

The researchers looked at a malignant breast cancer cell line and studied two particular chemicals involved in cell migration, which is a step in the metastatic process. A chemokine, or signaling protein, called SDF-1alpha, is highly expressed in lymph nodes as well as other common breast cancer metastasis sites, including the lung, liver and bone marrow. Called a chemoattractant, it is a chemical that typically attracts immune cells to move toward it.

The researchers also looked at epidermal growth factor (EGF), which is found in blood. Using the device, they found that SDF-1alpha attracts breast tumor cells in a way similar to immune cells, but the addition of EGF to this mix canceled this attraction. The results indicate that in real cancer, different signaling proteins work cooperatively, so understanding these behaviors could be starting points for cancer therapy, Wu said.

The device consists of micron-scale channels patterned into a hard surface. The researchers place cancer cells into one channel and add the chemokines into adjacent channels.

The setup is a bit like studying a fish in a fish tank rather than the ocean – isolating one or two factors and observing them specifically, rather than being mired in confounding environmental factors, Wu said.

The researchers are interested in chemokines known to be involved in the immune response, because cancer researchers suspect that metastasis uses some of the same molecular signals to allow cancer cells to move and invade other parts of the body.

“We are trying to understand whether cancer cells are borrowing a similar strategy,” Wu said.

In related experiments, Wu hopes to use real tumor cells from human patients in the device, not just cultured cell lines. They are also continuing to use the microfluidic device to look not only at biomarkers for metastasis, but also the physical forces that cells use to move through the body.

The first author of the paper, titled “Cooperative Roles of SDF-1α and EGF Gradients on Tumor Cell Migration Revealed by a Robust 3D Microfluidic Model,” is B.J. Kim, a research associate in Wu’s lab. The work was a collaboration with Melody Swartz, a cancer researcher at Swiss Federal Institute of Technology in Lausanne.