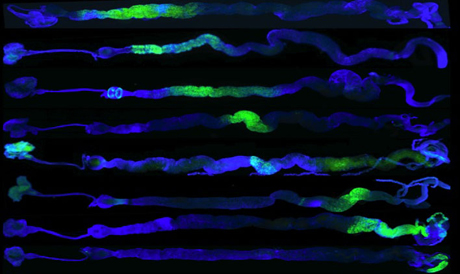 Provided
Buchon found that many genes were expressed only in specific regions of the midgut. Here, the green fluorescent protein was used to reveal the precise locations where eight different genes were switched on along the gut. 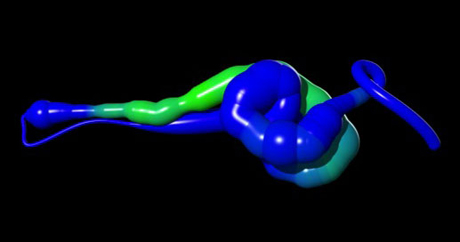 Provided
3-D models like the one above integrate both the location of gene expression (indicated in green) and the gut morphology.

Nicolas Buchon, associate professor of entomology, is giving the fruit fly research community a lot to digest: a detailed molecular and anatomical atlas of the fruit fly digestive tract. The results, published in the May 30 issue of Cell Reports, are accompanied by a new website to help researchers explore health and disease in this complex organ.

His work could allow scientists to better explore how infection and the resulting inflammation trigger stem cell proliferation. It could also help them understand how the health of the human gut is maintained and perhaps identify the origins of such disorders as Crohn’s disease and colon cancer.

“The insect gut is a common target for pest control measures and a temporary home for many insect-borne human diseases,” said Buchon. “Understanding its processes and complexity has very applied as well as basic significance.”

One of Buchon’s basic research questions is how stem cells respond to infection. 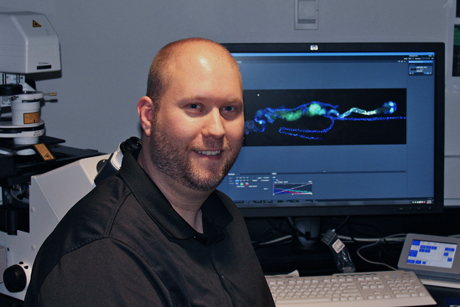 Provided
Associate professor of entomology Nicolas Buchon with an image of the fruit fly digestive tract taken on a confocal microscope.

“The gut is a good place to study this, since it is a hotspot for infection, immune response, inflammation and stem cell proliferation,” he said. “However, for a small organ – 5 millimeters in an adult fruit fly – its organization has incredible complexity, and for researchers to interpret what we see, we need to know exactly where we are.”

This motivated Buchon and his group to develop a comprehensive map of a fruit fly’s midgut, which follows a similar blueprint to our own stomach, small intestine and large intestine.

After mapping the physical topography – constrictions, flats, folds and protrusions – the researchers tracked precisely where hundreds of individual genes were turned on and off and their level of activity. Taken together, the data allowed them to identify six major regions and the master genetic switches that control them.

“Many genes were expressed in a single region in a gradient pattern that switched off at the borders of the anatomical regions; [that] gave us a clue that something might be diffusing out from the borders to cause the gradient,” said Buchon. “We were able to pinpoint some of the partners –  transcription factors and morphogens – that control this.

“In fact, by altering the expression of a single transcription factor, we were able to change the identity of a region,” he added.

With the anatomical structure in hand and an understanding of genetic fingerprints of steady-state normalcy, or homeostasis, the researchers then probed for changes in response to challenges from disease and natural aging. Like humans, the fruit fly gut contains absorptive cells to enhance nutrient uptake as well as stem cells that regenerate tissue after disruption from disease or injury.

“It was strange and fascinating to observe how stable those regions are,” said Buchon. “Although infection can completely change the patterns of gene expression and even section identity, through stem cell regeneration, the gut had precisely reset itself four days after infection had passed.”

Old age – which begins at around 40 days in fruit flies – revealed the limits of resilience in the system.

“In older flies, the system starts to fall apart, which was interesting but disturbing,” said Buchon. “The regional organization breaks down, equilibrium disappears and stem cells overproliferate. It has parallels to the earliest stages in cancer in humans.”

Researchers around the world are already using the atlas, which Buchon made available on the new flygut website, an interactive database that includes 3-D models, videos of midgut anatomy and all of the gene expression data from his study.