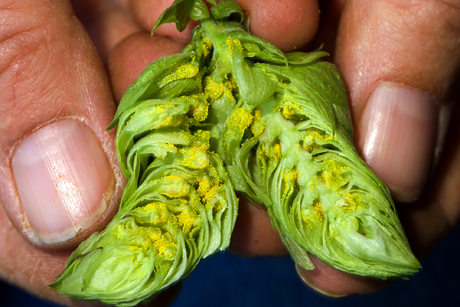 David Combs
A one-acre hop yard was established June 30 as a research planting to bolster the hops revival in New York. 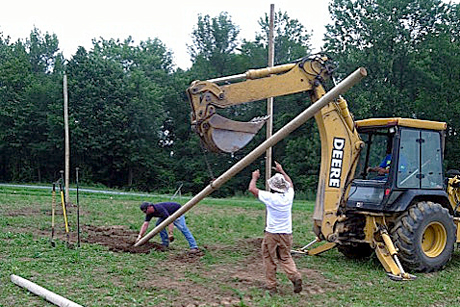 David Combs
The backbone of the hops yard consists of 69 poles, each 22 feet long, drilled into place using a backhoe.

A new crop is brewing at Cornell’s New York State Agricultural Experiment Station (NYSAES) in Geneva. A one-acre hop yard was established June 30 as a research planting to bolster the hops revival in New York.

“New York was once the biggest producer of hops in the country, until the crops were wiped out by mildew and Prohibition,” said research support specialist David Combs, manager of the hop yard. “This new planting includes both a research plot to hone methods for disease and insect control, and a diverse variety trial.”

It’s a timely investment. According to Cornell Cooperative Extension’s hops specialist Steve Miller, more than 100 acres of hops have been planted in New York in the past two years alone. The Farm Brewery Act of 2012, which removed barriers to growth in craft breweries, is creating demand for beer ingredients sourced from New York, including hops.

“People have been planting anything and everything,” Miller said. “With more than 30 varieties in the trial at Cornell’s hop yard, we hope to narrow down the varieties that grow well in this area.”

All varieties are expected to need protection from their old foes, powdery and downy mildew, two fungal diseases that thrive in humid East Coast summers. The hop yard has been given a clean start, according to plant pathology professor Wayne Wilcox.

“It’s important for growers to plant hops that have been tested for viruses and are free of mildew infection,” he said. “Fungicides in use in other states are likely to be effective against the diseases of greatest concern here – these were not available the last time hops were grown in New York state – and we’ll be evaluating them to develop the protocols most effective for the New York industry.”

Hops form on vigorous vine-like stalks called bines, which spiral along twine suspended from high wires and poles up to 18 feet tall. In the new hop yard, 69 poles were drilled to form 17 rows, and about 500 hops crowns were planted. Installation of drip irrigation and the “high altitude” wires connecting the poles will complete the yard.

The architecture of the hop yard will demand technological ingenuity to keep mildews at bay, according to Andrew Landers, an agricultural engineer specializing in pesticide application technology.

“One of the challenges is how do we get the spray up to the top of the canopy ­– evenly – without blowing through the narrow canopy into the space between the rows?” Landers said. “For the past decade we have studied air flow, which is the answer to controlling where the droplets fly. We are already working on developing ways to modify existing sprayers as a low-cost fix for growers.”

As part of the project, the team will also develop a New York hops grower’s guide, which will cover site selection, integrated pest management and pesticide recommendations.

Funding for the project was included in the New York governor’s 2013 budget, evidence of momentum in the state for the craft beer industry.

“This planting will benefit important agricultural research, which in turn, will help our state’s hops growers do their jobs even better,” said State Agriculture Commissioner Darrel J. Aubertine.

Tours of the planting will be available during the Fruit Field Day at NYSAES Aug. 1, and the next Brew Course and Hops Testing will be Sept. 20 at NYSAES.

Amanda Garris is the experiment station’s communications officer for the College of Agriculture and Life Science.