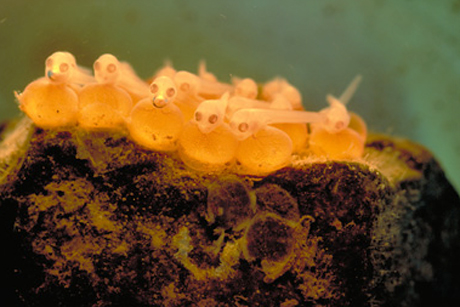 Margaret Marchaterre/Cornell University
Andrew Bass' studies of the early development of the brain in young midshipman fish hold clues to the evolution of more complex behaviors in mammals, such as vocalizing and gesturing at the same time. The picture shows freshly hatched larval midshipman fish.

Talking with your hands may have begun with fish, according to research presented by Andrew Bass, Cornell professor of neurobiology and behavior, at the Society for Experimental Biology’s annual meeting July 3-6 in Valencia, Spain.

The research offered evidence that the evolutionary origins of the link between speech and gesturing can be traced to a developmental compartment in the caudal hindbrain of fish.

The majority of fish and tetrapods, including reptiles, amphibians, birds and mammals, are all known to communicate acoustically. In a 2008 Science paper, Bass and colleagues provided evidence that brain networks instructing when muscles should contract – called patterning – for vocalizing in fishes, birds and mammals, and even primates, originate from the same compartment in the developing hindbrain.

This suggests that the vocal networks in all vertebrates evolved from an ancestrally shared brain area that originated in fish.

In his current presentation, which follows a 2012 paper in the Proceedings of the National Academy of Sciences (PNAS) on the topic, Bass drew on his 2010 Nature Communications study with colleagues showing that circuitry for controlling pectoral muscles – pectoral fins in fish, wings in birds and forelimbs in mammals – used for movement, develops in the same hindbrain compartment.

But, as the 2012 paper points out, pectoral appendages are also used for communication. Many fish are known to make sounds using their pectoral fins, while such birds as the club-winged manakin have developed unusual feathers and wing-bones that are rapidly rubbed together to produce humming sounds to attract mates. Similarly, humans often gesture with their forelimbs when they talk.

“Studies of early development of fishes show that neural mechanisms in the brain controlling complex mechanisms of social signaling, such as vocalizing and gesturing, have their evolutionary origins in a single compartment of the brain in fishes,” said Bass.

While there has been plenty of research to show a behavioral link in humans between speech and gesturing, Bass’ work provides rare proof of a neural connection between the two types of communication.

“Humans who are blind move their hands when they are speaking,” Bass said. “This reflects the essence of the deep-rooted coupling of these two communication systems,” he said.

In the future, Bass plans to further study the development of pectoral and vocal systems in the brain to better understand how they diverge as animals grow, as well as the genetic underpinnings of development of this part of the brain, he said.

Boris Chagnuad, a former postdoctoral researcher in Bass’ lab, who is a faculty member at the Ludwig-Maximillians-University Munich, Germany, was a co-author on the 2012 PNAS study.